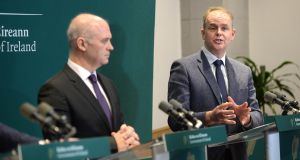 All schools, pre-schools and further and higher education settings may end up shutting well beyond March 29th to support efforts to contain the coronavirus threat.

Taoiseach Leo Varadkar announced on Thursday morning that the Government and health authorities decided that a two-week closure was needed in order to delay the spread of the virus.

At a briefing on Thursday evening, Department of Health officials said there was a chance school closures may extend beyond this point depending on the advice of the National Public Health Emergency Team.

Some well-placed sources have suggested the school shutdown could extend into the Easter holidays, resulting in a five-week closure.

In the meantime, the Leaving Cert and Junior Cert oral and practical exams are set to be postponed. They were due to take place between March 23rd and April 3rd.

“In the case of orals and practicals that are scheduled for the period of closure, the SEC will work with schools to reschedule these as soon as practicable,” he added.

These tests comprise the Leaving Cert oral tests in Irish, French, German, Spanish, Italian, Russian and Japanese, along with performance tests in Leaving Cert and Junior Cert music. Practical tests in junior-cycle home economics were also due to take place.

In addition, higher education institutions are drawing up alternative arrangements for May exams.

University College Dublin, for example, told students on Thursday in most cases – with the exception of a small number of clinical programmes – all remaining assessments, including final exams, will take place “at distance”.

Dublin City University also said its May exams for most students will be replaced with “alternative assessments”, while Trinity College Dublin is also drawing up alternative arrangements.

Many universities have moved their physical lectures online and are requesting staff to use video streaming technology to deliver classes in the same way they normally would.

Primary and secondary schools, meanwhile, gave students homework packs and assignments for a two-week period in advance of the school closures on Thursday afternoon.

Many secondary schools have also provided online resources for students and online lessons where they are equipped to do so.

Much of this is taking place on online learning platforms such as Office 365 or Schoology, where teachers can set assignments for pupils.

In addition to school closures, many sports and religious events associated with schools have been cancelled or postponed.

For example, the Irish Catholic Bishops has said that all confirmations are now postponed until further notice, while GAA and rugby competitions involving schools have been delayed indefinitely.

In a statement, Minister for Education Joe McHugh TD said he was “ deeply conscious” of the impact that school and education setting closures have on students, on families and on the wider community.

However, he said this was a necessary and proportionate measure to help contain the threat of Covid-19.

“This is the right decision at the right time. It is taken in the best interests of our children, our young people, our school and college communities and our wider society,” he said.