Twenty new cases of Covid-19 have been confirmed in the Republic, bringing the total to 90, after nine new cases were discovered in Northern Ireland, with the total there climbing to 29. Video: RTÉ News 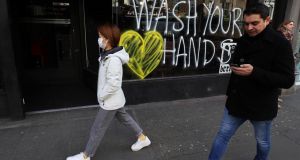 People pass graffiti reminding people to wash their hands on the window of a bar in Dublin’s city centre. Photograph: Brian Lawless/PA Wire.

Twenty new cases of Covid-19 have been confirmed in the Republic, bringing the total to 90, after nine additional cases emerged in Northern Ireland, with the total there climbing to 29.

The total number of people confirmed to have coronavirus on the island of Ireland is now 119.

At 6pm on Friday the State’s chief medical officer, Dr Tony Holohan, announced that in the Republic six of the new cases were associated with travel and 12 were contacts of confirmed cases. Four of the latter are healthcare workers.

The remaining two cases are the result of community transmission, bringing to seven the number of cases associated with this form of transmission.

“In light of rapidly changing conditions and restrictions across a number of EU countries, my Department is now advising people to exercised ‘a high degree of caution’ before deciding to travel to other EU States,” he posted on Twitter at 10pm.

The Department will continue to update advice, he added.

Asked if the advisory applied also applied to the UK, Mr Coveney replied: “Not advice re UK”.

Later on Friday night it emerged that mass gatherings in Britain are set to be banned, in a significant shift in position by Boris Johnson’s government.

Meanwhile, US President Donald Trump has declared a state of emergency, as the number of cases of coronavirus continued to rise in the United States and criticism mounted over the lack of adequate testing in the country.

Speaking at a press conference in the White House, Mr Trump said that the United States had implemented a “very vigilant effort to combat and ultimately defeat the coronavirus.”

Here, the criteria for people requiring testing has been updated by the National Public Health Emergency Team (NPHET), to the effect that anyone with a new fever of 38 degrees or more, or chills and/or respiratory tract infections including cough will require testing.

This is expected to lead to a big increase in the number of people needing to be tested. However, GPs will be able to refer patients directly to the National Ambulance Service for testing with having to first consult with public health doctors, as was the case up to now.

Anyone coming back from an area subject to a Department of Foreign Affairs advisory against non-essential travel needs to self-isolate for 14 days. Currently, this applies to Italy and Spain, but may be extended to other regions.

Travel restrictions for healthcare workers is also under consideration, the NPHET indicated.

“However, rather than staying indoors, consider outdoor activities such as playing football in the open in small groups of three or four while maintaining social distancing of two metres,” said Dr Ronan Glynn, the State’s chief medical officer.

Dr Glynn said the restrictions on social interactions were not “absolutist” but “if children continue to mix with children as normal the measures won’t be as effective”.

NB TRAVEL ADVICE: In light of rapidly changing conditions & restrictions across a number of EU countries, my Dept is now advising people to exercise “a high degree of caution” before deciding to travel to other EU States. We will continue to update advice. #COVID19 pic.twitter.com/5ai8U4SGiH

Keep on top of #traveladvice updates with #TravelWise: https://t.co/Y2p0zSPGYK

Dr Holohan said officials were not telling pubs and restaurants to close and they were “not talking lockdowns”.

“We’re not locking down the country, I’ve heard rumours of army and gardaí we have no plans for that,” he said.

In Northern Ireland nine new positive cases were announced at 2pm on Friday.

A total of 321 tests have been completed in the North, in cases where people met the case definition for suspected coronavirus.

A significant number of further tests have been carried out for surveillance and clinical purposes – for example, for patients in intensive care and other hospital settings with respiratory symptoms.

There has been one confirmed death from coronavirus in Ireland.

The HSE is talking to hotels regarding isolation beds with chief executive Paul Reid saying it has had significant offers from the sector.

The health service is still in control of the Covid-19 outbreak but the public needs to get behind the service to combat the virus, said Mr Reid earlier on Friday.

“We are conscious that the public and staff have had many frustrations about healthcare delivery over many years, but I am calling on communities to really rally behind us in the HSE in a way you have never done before,” said Mr Reid.

The health service has been planning for the outbreak since January, he added.

This morning Minister for Health Simon Harris said all people coming back from Spain and Italy from today will be asked to restrict their movements for the next two weeks, which includes not going to work.

The Department of Foreign Affairs is advising Irish citizens to avoid non-essential travel to Spain while citizens are advised not to travel to Italy at all.

On its website, the department advises that a “significant number of cases of novel coronavirus [Covid-19] have been confirmed in Spain. The highest incidences are in Madrid, Vitoria and Labastida in the Basque Country, Catalonia and the Rioja region. For the moment, we recommend that non-essential travel to Spain be avoided.”

For those who are already in Spain, the department advises people to monitor developments regularly and follow the advice of local authorities.

Spain has more than 2,000 cases and its government reported 84 deaths on Friday morning, up from 47 on Wednesday.

Mr Reid said the community needs to back healthcare workers and GPs and this will include supporting their childminding needs in order to allow them get to work.

In particular, he appealed to the corporate sector to facilitate workers’ childcare needs where they have a spouse employed in the health service.

Asked about reports of 10,000 beds being sought to deal with the surge in Covid-19 cases, Mr Reid replied that the heath service is “exactly in the phase we want to be now”. And it would be a “distraction” to talk about emergency planning.

“The investment we are making right now is the right investment and the actions we are urging the public to take are the right ones”, said Mr Reid.

The health agency also said there has been a marked reduction in the number of people on trolleys since the Covid-19 outbreak began in the Republic.

HSE chief operations officer Anne O’Connor said: “In terms of our trolley count, that has dropped away considerably. In Galway for instance we had just one patient waiting on a trolley. The trolley count is lower than we have ever seen in quite some time. Our hospital attendances and admissions are way down this week. There are just 57 patients waiting on trolleys today – that is a very, very different number compared to what we are used to during the winter period.”

The Government has said that as of now the UK is not deemed an infection area so no measures will be taken with regard to people returning to Ireland from this week’s racing festival Cheltenham in the UK.

Unprecedented restrictions on public life aimed at curbing the spread of coronavirus could remain in force for months, public health doctors have indicated after the number of cases jumped by 63 per cent in a single day.

Schools, colleges and creches, along with museums, galleries and other public buildings are today beginning a 19-day enforced period of closure designed to interrupt the transmission of Covid-19.

It is likely the school closures could extend to five weeks, until the end of the Easter holidays.

Other measures such as visitor restrictions at hospitals, nursing homes and prisons, and a ban on mass gatherings, as well as the closures are due to be reviewed before the end of the month.

The HSE has urged the Government to introduce measures to prioritise childcare arrangements to allow health workers to do their jobs during the current coronavirus crisis, the country’s largest public service union has said .

Fórsa said the HSE had informed unions of its recommendations to the Department of Health and the Department Public Expenditure during a teleconference on Thursday and unions are expecting an update this morning.

Mr Harris has said that whatever support is necessary for the HSE to combat the spread of Covid-19 will be provided. “We can’t stop the virus coming to Ireland but we can try to flatten the curve.”

He told RTÉ radio’s Morning Ireland “we are more likely to get the virus through bad hygiene practice”. He urged people to take heed of the advice they have been given. “This is a marathon, not a sprint. We are asking people to live their lives a little bit differently,” he said.

Garda Commissioner Drew Harris on Friday unveiled a range of “exceptional event” measures in response to the coronavirus.

He also insisted that suspects will still be arrested for crimes as usual and the investigation of serious crime would continue.

While he said some gardaí would have a high visibility presence around some shops, including directing traffic in and out of car parks, gardaí would not patrol at retail outlets.

A conference call between Minister for Enterprise Heather Humphreys and stakeholders in the retail sector including supermarkets, multinational companies and umbrella groups has been told that supply in supermarkets will return to normal once consumer shopping habits return to normal. –Additional reporting PA