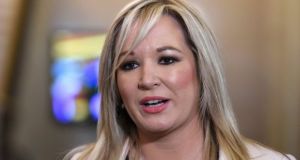 Stormont’s deputy first minister Michelle O’Neill has said schools, universities and colleges in Northern Ireland should close in the wake of the coronavirus outbreak.

She claimed the public were concerned and fearful and the difference with the Republic of Ireland’s approach was causing confusion.

The Republic has implemented blanket closures and teachers just a few miles away from each other across the open Irish border are following different official approaches.

Her Sinn Féin counterpart said: “Now is the time to take action and ensure the schools, universities and colleges are closed and that needs to happen immediately.”

She said large numbers of parents had decided not to send their children to classes today and government needed to listen to the public.

She added: “People are fearful.”

Her volte-face from Thursday when she backed the decision to keep schools open was made “on the back of public concern that is clearly there and the angst there among the public”.

She declared: “Now is the time to take action.”

A total of 20 cases of Covid-19 have been detected in Northern Ireland so far.

Medical officials in Belfast are wary of acting too soon before there is evidence of community transmission, meaning the path of the virus cannot be traced.

European health authorities and the World Health Organisation (WHO) have urged early and serious action.

In Ireland, schools, colleges, childcare facilities, museums and other tourist attractions have been closed in a major lockdown aimed at thwarting the spread of the virus and guided by European and scientific experts.

Ms O’Neill added: “We need to err on the side of caution and give people the reassurance that they are looking for in terms of a government approach.

“We need to see one approach across the island, one message that is consistent so things are not even more confused.”

Mrs Foster has accepted that schools will close due to the coronavirus.

She said the region is 14 weeks away from the peak in the infection’s spread as she warned many people may already have it but not realise.

“The timing of all of these things is where the science comes in and the modelling which has been done and which continues to be done by those scientists will inform the decision that we have to take, both at UK level and indeed at Northern Ireland level as well.”

Public health authorities in Northern Ireland fear if they act too soon, they will lose the benefits social isolation will bring in slowing the spread of the virus.

On Thursday, Mrs Foster and Ms O’Neill acknowledged the closure of schools in the Irish Republic had left parents north of the border with many questions.

Mrs Foster, who expressed disappointment the Irish Government had not given Stormont prior notification of its move, insisted the action at this stage would be “counterproductive”.

She warned it could take healthcare workers away from hospitals and expose grandparents looking after children at home to increased risk from the potentially deadly virus.

Mrs Foster has said the infection is more advanced in Ireland, with community transfer of the virus between patients with no links to overseas travel.

Chief medical officers in Northern Ireland and England, and the UK’s Scientific Advisory Group on Emergencies (Sage) all advised against closing schools.