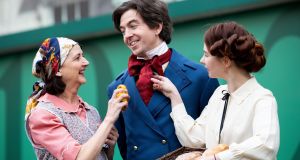 The Dáil 100 Experience was launched on Tuesday and showcases the history of Leinster House and the evolution of Irish democracy through the decades. Photograph: Tom Honan

Labour Senator Ivana Bacik has written a letter of complaint to the Ceann Comhairle of the Dáil Seán Ó Fearghaíl about what she says is a “notable lack of women” in portraits outside Leinster House to celebrate 100 years of the Dáil.

The Oireachtas on Tuesday launched the “Dáil 100 Experience” which takes place this weekend and showcases the history of Leinster House and the evolution of Irish democracy through the decades.

Portraits were also erected outside Leinster House of notable Irish figures to celebrate the milestone. Ms Bacik, who is the head of the Vótáil 100 Committee, has called for a portrait of Constance Markievicz to be included.

In her letter to Mr Ó Fearghaíl she said the Dáil commemoration should be “inclusive of the immense contribution made by women”.

She wrote: “I am writing to you regarding the recent display of portraits in Leinster House, in particular the 27 pictures adorning the front of the building, as part of the ‘Dáil 100’ commemoration programme. As chairperson of the Vótáil 100 Committee, I would like to draw your attention to the notable lack of women in these new portraits.

“In particular, I would ask why Constance Markievicz was not included in the display. Being the first women ever elected to Westminster, the first woman TD in Ireland, the first woman to serve in any Cabinet in a European State, and Ireland’s first minister for Labour, I would have thought her trailblazing contribution was significant enough to warrant her inclusion as one of the images selected for the front of Leinster House in this significant centenary year.”

She said the contribution of women to the history of the Houses of the Oireachtas was “immense”.

“That contribution has been made as Dáil deputies, senators, cabinet members, cathaoirleach of Seanad Éireann, and tánaistí. To date, 114 women have served in Dáil Éireann, and 164 have served in Seanad Éireann. Yet there are very few portraits of women generally on display in Leinster House. In this centenary year, it is important that the Dáil 100 commemoration should be inclusive of the immense contribution made by women to the history of the foundation of our State.”

She has asked that a picture of Constance Markievicz be included in the portrait display to mark the Dáil 100 centenary.