May’s Brexit deal is defeated: What could happen next?

No confidence motion throws up several possibilities including a general election

Scottish first minister Nicola Sturgeon says that she believes Brexit should be brought back for a second referendum following the defeat of Theresa May's exit plan from the EU in the House of Commons. Video: Reuters 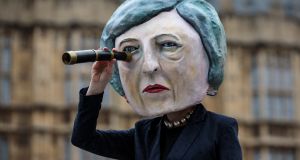 A demonstration featuring a paper mâché Theresa May outside the Houses of Parliament in London. Photograph: Jack Taylor/Getty

The UK parliament’s rejection of the proposed withdrawal agreement with the EU marked the biggest defeat ever inflicted on any British government.

Theresa May’s Brexit deal, the culmination of two years of complex and often fractious negotiations, was rejected by 432 votes to 202 in the House of Commons on Tuesday night.

The defeat, by a whopping 230 votes, leaves the prime minister wounded politically and with just 72 days to revive her deal before the UK is due to leave the EU. The vote has cast doubt on how the UK might leave the EU and on the timing of its exit.

The vote throws up a range of possible scenarios, adding to the uncertainty around the entire Brexit process and deepening the worst British political crisis in generations.