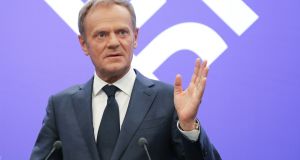 European Council president Donald Tusk: “If a deal is impossible, and no one wants no deal, then who will finally have the courage to say what the only positive solution is?” he tweeted. Photograph: AFP Photo/Ludovic Marin/Getty Images

There were expressions of regret and concern in Brussels that a no-deal Brexit looms larger in the wake of Tuesday’s Commons vote.

EU Council president Donald Tusk urged the British government “to clarify its intentions with respect to its next steps as soon as possible”.

He stressed that the EU 27 remain united and will seek to reduce the damage that will be caused by Brexit.

Mr Tusk tweeted: “If a deal is impossible, and no one wants no deal, then who will finally have the courage to say what the only positive solution is?”

European Commission president Jean-Claude Juncker said the vote would intensify preparations for a no-deal Brexit. “The risk of a disorderly withdrawal of the United Kingdom has increased with this evening’s vote,” he said.

The European Parliament’s chief Brexit representative Guy Verhofstadt said the “UK parliament has said what it does not want. Now is the time to find out what parliamentarians want.”

The UK Parliament has said what it doesn't want. Now is the time to find out what UK parliamentarians want. In the meantime, the rights of citizens must be safeguarded. #Brexit

Annegret Kramp-Karrenbauer, the leader of Angela Merkel’s ruling CDU party and the German chancellor’s likely successor, tweeted that she “deeply regretted” the decision. “A hard Brexit will be the worst of all options,” she said. French president Emmanuel Macron said the EU had gone “as far as it could”.

Privately diplomats from the EU 27 have been insisting it will not be up to member states to offer concessions until the UK and prime minister Theresa May make clear what they want.

After the vote they were insisting that the next move is Mrs May’s.

Room for manoeuvre is limited. The withdrawal agreement will remain closed, and with it, the Northern Ireland protocol and backstop.

But since December, EU officials and diplomats in Brussels have been saying that the political declaration on the future relationship may be amendable.

It contains evolutionary clauses that make clear that if the UK moves on its red lines the EU will not be found wanting.

If May was willing in that context to move towards a closer future relationship with the EU – one involving regulatory alignment and customs-union membership, a break with hard Brexiters – the backstop provisions of the aithdrawal agreement could begin to be seen as redundant, although they would remain in place in the treaty as a guarantee.

Sources in Brussels also expect that there would be a willingness among member states to agree – and they must do so unanimously – to a short extension of article 50, delaying the UK’s departure by a couple of months.

But they would probably also insist on assurances from London that the extension would produce a definitive result, whatever that might be, in or out.

An extension could not be simply an opportunity for further prevarication and would not be granted as a blank cheque.

The sense in Brussels is that although a path to a Commons majority for a softer Brexit may be opening up, it requires such a significant U-turn by May, and repudiation of long-held red lines, that it may well be beyond her.