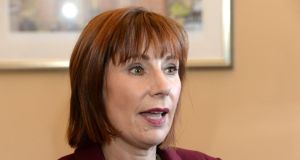 Josepha Madigan, Minister fo Culture, Heritage and the Gaeltacht, said she hoped for a progress report within a month. Photograph: Cyril Byrne

Minister for Culture Josepha Madigan has urged the Abbey Theatre and the forum representing 300 artists to engage in dialogue in the row over the National Theatre’s use of co-productions which has resulted in fewer in-house plays.

Ms Madigan told the Dáil she had written “to both the theatre practitioners and to the Abbey theatre in relation to some of the issues that have been raised”.

She said: “I know that the Abbey has acknowledged the difficulties the theatre practitioners are experiencing and I hope that they will report back to me in a month’s time on the progress they have made.”

The issue was raised by Fianna Fáil leader Micheál Martin who asked if there was a national policy for the Abbey. “What is it? Is the Government committed to it given the historic significance of the Abbey, the original objectives and how they can be met in a contemporary world?”

His remarks follow the controversy over a letter sent to the Minister signed by 300 actors, directors, designers, agents and playwrights which stated that the policy of co-productions had “caused devastation among our ranks”.

The letter stated that there would be no Ireland-based actor on the Abbey stage for the five-and-a-half months between the final performance of Jimmy’s Hall on September 8th, 2018, and the opening of The Country Girls, on February 23rd this year.

Mr Martin also highlighted a survey of artists from August to October last year which showed an average income of about €22,000.

“There is a very real concern about the huge difficulties that artists have generally in making meaningful returns on their work.”

The Minister told him she had urged both sides “to engage in dialogue, to engage in conversation to achieve a mutually satisfactory conclusion and I will be in a position to update the House shortly”.