‘It will cost what it will cost,’ according to Houses of the Oireachtas superintendent

Leinster House is undergoing the most extensive renovations in its 270 year history, which will see it restored to its former glory. Video: Enda O'Dowd 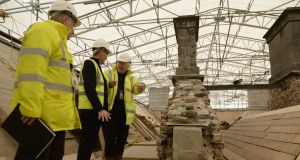 Democracy is always an unfinished business. Sometimes, even, it is under repair, as happens this month as Leinster House readies to mark the 100th anniversary of the first sitting of the Dáil.

The 273-year-old Kildare Street building, built in 1745 as the home of the Duke of Leinster, and Dublin’s most splendid townhouse, has been undergoing major refurbishment for more than a year.

But in 2006 a survey was undertaken of the building and it yielded alarming results. Leinster House was a fire trap. The floors were sagging, creating a fire hazard in the space between them and the ceilings.

There was an urgency to get the job done but work did not begin until last year because of budgetary constraints and a need to “decant” services elsewhere, including moving the Seanad next door to the National Museum of Ireland.

An inventory of the building revealed 22 different electrical services.

“We couldn’t figure out what was live and what wasn’t,” said Ciaran O’Connor, the chief architect at the Office of Public Works (OPW).

The priority was fireproofing, but a floor-to-roof analysis of the building revealed unanticipated problems.

‘Cracks in the wall’

At first glance there was little indication of cracking in one of the corners of the building, but further analysis revealed an anomaly. One wall was not “toothed”, as they say in the building trade, to the other.

“One wall was completely free-standing, the other was just pushed against it. We found that the cracks in the wall had moved. We could put our finger into the gap. What we had to do is put stainless-steel tie rods between the two walls to stitch them back together,” Mr O’Connor said.

“You would have thought that the normal construction process, even since 1740, would be to tie walls together, but they didn’t for whatever reason.”

Some of the bricks on the front facade also needed to be replaced. They were made from Ardbraccan limestone quarried in Co Meath, but that quarry had since closed and replacement stone had to be found in Co Cavan.

The roof of Leinster House had not been repaired since it was built. An analysis discovered a lot of weak timbers in need of repair. The slates on the outer pitches have been replaced and a whole chimney rebuilt.

“There were voids and holes all the way through the building,” Mr O’Connor added. “It has lasted a long time, but it certainly needs a lot of work.”

It is hoped that most of the work will be finished by Easter and the job will be completed by the summer recess, when the Seanad is due to move back.

The original budget for the work was €8 million, but costs escalated as new problems were discovered. Attempts by The Irish Times to establish a final estimate for the cost of the work were unsuccessful.

“As Michelangelo said to the pope, ‘It will cost what it will cost’,” said Paul Conway, superintendent of the Houses of the Oireachtas.

Mr O’Connor maintains that when the work is completed, the public will see it was worth it and the cost of enclosing the roof, for instance, will be more than made up for by the productivity gains that arise.

“If it turns out the way we think it will turn out, it will be very great value,” he says.

Mr Conway cautioned against the expectation that there will be a “wow factor”, as much of the essential work will be invisible to visitors.

“It might smell fresher and there will be improvements in details, but it is not like we are putting in new offices or new services,” he said.

“This in itself is a heritage project. We’re not just fixing it. We are making it right for another 300 years. It’s the family home for Irish democracy.

“We would have liked to have it done for the 100th anniversary of the Dáil, but it was more important to get it done, and get it done right.”