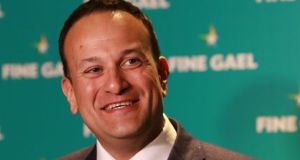 Taoiseach Leo Varadkar said he was cutting down on meat “both for health reasons and for reasons of climate change”.

Taoiseach Leo Varadkar has defended in the Dáil remarks he made about cutting back on his consumption of meat after angry criticism from a number of Opposition TDs who said the farming sector was already under threat from Brexit.

On Monday, the Taoiseach said he was reducing his meat intake to help reduce his carbon footprint.

But Fianna Fáil TD Jackie Cahill had accused Mr Varadkar of making a “flippant comment” and said it was “totally inappropriate for a head of Government” and it was damaging to a hugely important industry.

Mr Cahill said the industry was on its knees because of low beef prices and he called on the Taoiseach to withdraw his remark.

The party’s agriculture spokesman Charlie McConalogue said Mr Varadkar should be “promoting the fact that Ireland is the most efficient country in Europe in which to produce beef”.

The Taoiseach should be giving leadership to the sector and “not indeed take the approach that you did”.

Independent TD Danny Healy-Rae, who previously said that “God above decides the weather”, said “it’s ridiculous to think that people should stop eating meat to change or protect the weather”.

He said that “if you’re a hard worker and do a hard day’s work there’s nothing to bring you back and to revive you again than a piece of good meat, whether it is bacon and cabbage or it is beef or mutton stew.

“If you don’t have that you won’t rise out the following day and ‘tis easy to know these people that are suggesting that we should give up eating meat, they never did a day’s work.

“If there was a shovel put into their hands they’d starve with the hunger because they won’t make it until dinner time.”

Mr Varadkar had not said people should stop eating meat but that “I am trying to eat less meat both for health reasons and for reasons of climate change”.

He added however that given the amount of travel he did “I’m probably not the best example”.

Independent TD Michael Healy-Rae said the Taoiseach did not understand the anger his comments have caused, which were hurtful to farmers.

“To hear you coming out with a comment like that encouraging people ‘well you’re going to do your part by eating less meat’ – it’s well easy to know that you’re not a struggling farmer trying to make a living out of farming. You’re the Taoiseach for all the country, not just for Dublin city,” he said.

Mr Varadkar said he did not give anyone dietary advice or suggest that anyone do anything.

“I was specifically asked what I was doing on climate change and I said that I was trying to eat less red meat – not giving it up.”

He added: “I had a very nice Hereford steak last night”.

He said: “It’s not flippant. It is a fact that red meat increases instance of cancer and also contributes more to climate change.

“But I can reassure deputies that I have not become a vegan or anything like that and I’m very happy to eat fish landed in Donegal and poultry and turkeys and pork meat and all of the wonderful products that Irish farmers of all sorts produce.”

“As one of the most important beef exporters in the northern hemisphere, it is very unfortunate indeed that our Taoiseach should be calling into question the sustainability of Irish beef production. In 2018 agri-food sector exports amounted to €13.6bn with the value of meat and livestock exports comprising €3.97bn of that total. Surely the onus is on Mr Varadkar to protect such a vital industry; his cavalier comments however will do nothing but undermine it,” he added.