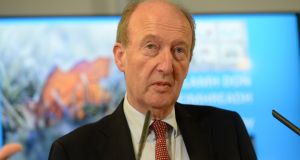 Minister for Transport Shane Ross admitted that there would be checks on lorries coming into the Republic of Ireland from the UK via Northern Ireland in the event of a no-deal Brexit.

“I would anticipate that there would be checks,” Mr Ross told reporters at a briefing on the Government’s latest plans to deal with the UK crashing out of the EU without an agreement.

The Minister was answering a question about whether a lorry carrying agri-food produce from Scotland into the Republic via Northern Ireland would face border checks.

“Well no,” said Tánaiste Simon Coveney, intervening after Mr Ross answered, saying that the Border would be dealt with through the divorce deal, just hours before the UK parliament overwhelmingly rejected it.

Mr Coveney said that the Government had “deliberately not” gone into contingency plans for dealing with the Border in a no-deal scenario because the UK had not voted on the plan.

“If Britain leaves without a deal well, then we obviously have to difficult discussions with the European Commission and with the UK in terms of how we protect the EU single market,” he said.

The Tánaiste said the Government could discuss no-deal contingency plans for Dublin Port and Rosslare because there was not the same “political sensitivity” around those as with the Border.

Mr Ross, setting out transport no-deal contingency plans, conceded that post-Brexit delays on the UK landbridge would be “a major difficulty” for perishable goods or short shelf-life goods.

He identified the Irish, UK and French ports, in particular Dublin, Rosslare, Dover in England and Calais in France, the main “pinch-points” where delays would emerge.

The Minister insisted that “the initial findings” of a review of shipping routes was that there was enough capacity on direct ferries travelling to continental Europe to provide an alternative for Irish importers and exporters to avoid delays on the landbridge from a no-deal Brexit.

Mr Ross said he was satisfied that the shipping sector “can respond quickly” to meet demands for further capacity on direct sea routes with the EU.

The new Irish Ferries vessel WB Yeats would be “pivotal” in creating more capacity, he said.

He had two discussions with the company about its decision to cease its Rosslare to France direct route in favour of operating directly from Dublin and this was because of “extra capacity.”

He was “almost certain,” he said, that an inter-department body was considering a simulation exercise, similar to one carried out near Dover, to assess the impact of Brexit-related traffic jams.

Dublin Port, the country’s busiest port, was expecting disruptions in a no-deal scenario, he said.

“The volume of trade with the UK and the scale of the checks required when the UK becomes a third country will likely result in delays of goods moving through the ports,” he said.

He expects no disruptions in air travel to materialise. Ryanair’s “template” to meet post-Brexit EU majority ownership rules was “ready to go” and Aer Lingus was confident that it would comply too.