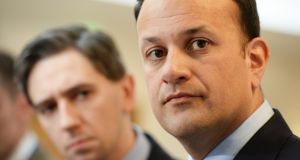 The pointing of fingers and – perhaps – the rolling of heads as a result of the cervical screening scandal is far from over.

As more details emerge, Government Buildings and the Department of Health are scrambling to get a full picture of the events that led to the legal settlement reached with Vicky Phelan.

Some of that finger-pointing broke out on Sunday between the Department of Health and the HSE, where relations seem to have worsened over the weekend beyond even the usual frosty suspicion.

There is a frantic search on in the Department of Health and the HSE for information about the cervical screening scandal; because that is what it has morphed into over the weekend – a full scale scandal. With headlines about women who died after a mistaken all-clear, and calls flooding into a special helpline, this is turning into a five-alarm political crisis by the hour. It will dominate politics this week.

The story is a potent mixture of medical inadequacy, bureaucratic callousness and official buck-passing. It is also – potentially – politically explosive.

The Taoiseach has said that there will be an inquiry into the failures in the screening scheme and the treatment of women. But that is unlikely to dial down the immediate political temperature. The Cabinet meets on Tuesday morning, when the Minister for Health will brief his colleagues. He will need more information by then. The Dáil sits in the afternoon, where answers will be demanded by TDs.

The immediate focus will be on who knew what and when; who made the decisions not to inform the women about their tests; and what the consequences of that were. The legal approach to the Vicky Phelan case is likely to come under scrutiny. Politicians will be expected to give an account of their knowledge and actions during and after the mistakes of the screening service.

The focus of this scandal will now move to the Dáil on Tuesday. One of the functions of parliament is to force government to give information about itself. That responsibility extends not just to the political and policy decisions governments make, but to the delivery of public services and the treatment of people by the organs of the State. And while politicians can be evasive in press statements or media interviews, if they mislead parliament, they are in big trouble. So the first thing the Government is trying to do is to establish clear and correct information about the events.

The focus of this story will be on the lives of women that have been let down by the screening service. But in tandem with that, there is will be a requirement to identify responsibility and accountability. Already the clinical director of the Cervical Check service Gráinne Flannelly has resigned; revelations on Morning Ireland about warnings given to Tony O’Brien, outgoing head of the HSE, about the outsourcing of the service to an American company 10 years ago will put pressure on him.

But responsibility filters inevitably upwards towards the political structures that are the ultimate source of authority in our democracy.

Political responsibility is not operational; it is executive. Politicians will not be hung for the failures of a service over which they had no appreciable day-to-day control or direction. But they will be held responsible if they were informed about failures or even concerns that they failed to act on.

Simon Harris is in the front line, but the record of his predecessor as minister for health – Leo Varadkar – will also be scrutinised. If Varadkar was credibly warned about this as minister and did nothing, then this story will take a violent lurch.

Politicians will also be held responsible if they mislead people – see the resignation over the weekend of the British home secretary Amber Rudd. So the premium on reliable information could not be higher.

The failure of the screening service is primarily a story of State shortcomings and – perhaps avoidable – personal tragedy. Depending on the information that will come to light over the next 24 hours, it could also pitch the Government into a political crisis.