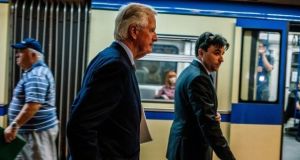 “He added: “We want to succeed with the UK, not against the UK,” the EU’s chief Brexit negotiator Michel Barnier has said.

The EU’s chief Brexit negotiator Michel Barnier has urged rapid agreement by June on the scope of any British alignment with the single market.

He said there should be “safety controls” to protect the European trading bloc.

Mr Barnier is on a two-day visit to Ireland and Northern Ireland, where the Irish Border is among the most thorny issues facing Brexit negotiators.

A backstop option for the EU withdrawal agreement would see continued Northern Ireland alignment with EU rules affecting the all-island economy, but any divergence from the rest of the UK would meet strong unionist objections.

Mr Barnier said: “We need to agree rapidly by June the scope of alignment, what I call the safety controls that are...to respect the single market.”

He added: “We want to succeed with the UK, not against the UK.

“Together with the Irish government we are looking for practical solutions.”

On Monday, Mr Barnier delivered a keynote speech during a meeting of the Irish government-hosted All-Island Civic Dialogue on Brexit in the border town of Dundalk, Co Louth.

He then crosses to Newry in Co Down for meetings with business leaders from Northern Ireland.

On Tuesday, Mr Barnier will visit the other, north-western end of the porous 380km Border at Derry.

It will be the UK’s only land border with an EU country after Brexit and is among the most vexed issues facing negotiators.

It is Mr Barnier’s third visit to Ireland and Mister for Foreign Affairs Simon Coveney said he was a friend to Ireland.

She told the BBC: “He’s hearing a very strong message from the Republic of Ireland’s government, he’s hearing it from Sinn Féin.

“We have tried to get him to understand the unionist position for the people of Northern Ireland, but he hasn’t really responded to that and I’m disappointed about that.

In response, Mr Barnier said: “My door is open.”

A joint report on the UK’s withdrawal agreed in December by Prime Minister Theresa May and European Commission president Jean-Claude Juncker included both British proposals, along with a third “backstop” option which would keep Northern Ireland in the customs union.

But a version published by the EU in February and agreed by the EU27 last month contained only the “backstop”, effectively drawing a customs border down the Irish Sea, which a furious Mrs May said “no British prime minister could ever agree”.

Mr Barnier has said that substantial parts of the withdrawal deal — including a solution for the Irish border — remain to be agreed by the autumn.