‘Sarah’ was one of three victims of Keith Burke (29), of Galway, who was jailed this month 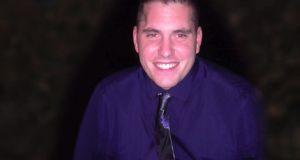 Keith Burke (29) of Addergoolemore, Dunmore, Co Galway, was found guilty of raping three foster children between 2003 and 2007. He was between 14 and 18 at the time, while the girls were all under 10. He was jailed earlier this month at the Central Criminal Court. File photograph: RTÉ

A woman repeatedly raped as a child by a teenager over a period of seven years while she was in the care of his parents has called for the establishment of a statutory commission of investigation into what happened.

Burke was jailed for 7 ½ years earlier this month at the Central Criminal Court. The three women told their stories in an RTÉ Investigates Fostered and Failed programme, aired on Tuesday night. The Health Service Executive has apologised unreservedly for failings in the care of the three girls.

Taoiseach Leo Varadkar told the Dáil on Wednesday an independent report on the case is due soon after it was delayed because of a criminal case.

He said the child and family agency Tusla would act on its recommendations.

The report is based on an investigation initiated by Tusla through the national review panel two years ago. The review was carried out by experts in the childcare sector.

In 2000, aged just five, Sarah was placed in foster care with Kathleen and Gerry Burke. Over the following years she was systematically raped by Keith Burke.

Rachel Barry, another of those abused by Burke when she was a young girl, waived her anonymity and was interviewed in the RTÉ programme. She was placed in the family home for weekly respite care in 2005, from the age of eight.

In a statement issued on behalf of his client Sarah on Wednesday, solicitor Ronan Hynes of Keating Connolly Sellors Solicitors noted the “full, unreserved apology” from the HSE in respect of the service failings experienced by Sarah and the other girls.

“Their bravery and courage to speak out was truly remarkable in horrific circumstances. There remain however many unanswered questions,” Mr Hynes wrote.

“Our client and her family have in the past been met by a wall of silence from the HSE and Tusla. In no way does the HSE apology diminish our determination on behalf of our client to seek a full independent inquiry into the sexual child abuse which occurred at the foster care home in Co Galway. We strongly believe that these cases should now be fully investigated by way of a commission of investigation.”

Mr Hynes has written to Ministers for Health Simon Harris and Minister for Children and Youth Affairs Katherine Zappone to request that such a commission be established immediately “to ensure accountability within our State agencies, and most importantly, that the victims of abuse and their families get the answers they are looking for”.

“Sarah and her family do not believe for one second that a review by the National Review Panel, which is commissioned by Tusla, will lead to a full independent and transparent inquiry. This needs to be a watershed moment for the foster care system in Ireland and, in particular, the responsible State agencies.”

Mr Varadkar told Sinn Féin leader Mary Lou McDonald in the Dáil that everyone was dismayed by the cases documented in the RTÉ programme.

“Sexual crimes against children are the worst form of crime; abhorrent, unspeakable and unforgiveable,” he said.

Mr Varadkar said the sentence Burke received might be considered lenient by some people, but he said it was for the Director of Public Prosecutions to decide if an appeal was appropriate.

Irish Foster Carers’ Association chief executive Catherine Bond said a risk assessment on Burke should have been carried out and she warned that other children could come forward.

Chief executive of the Dublin Rape Crisis Centre Noeline Blackwell called for changes to the prosecution service and to the way in which children are treated when they make a report of abuse.