Master of maternity hospital says 65% of €1.6 billion liability was for obstetrics cases 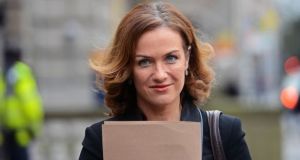 Master of the National Maternity Hospital Rhona Mahony said the difficulty for everyone in a court case was that “you’re pitting doctors against their patients”.

Doctors are no longer willing to go to court to defend medical negligence cases because of the legal costs involved, according to Master of the National Maternity Hospital Rhona Mahony.

Dr Mahony said that 65 per cent of the € 1.6 billion liability for claims against the State in 2016 was for obstetrics cases, particularly cerebral palsy, a condition resulting from a lack of oxygen to the brain.

“The cerebral palsy cases are unique in terms of the quantum of the claim,” she said. “It could be € 15 million or € 20 million. The liability is enormous and related to long-term care and compensation for the baby,” she said.

“Doctors are very reluctant to go court because they feel they are not going to win their case, that they are very difficult to defend even where physicians feel strongly that there has been reasonable care.”

There had only been one successful defence of a cerebral palsy case in the past 10 years. “You can understand why, because everybody, including the doctors, wants their patients to be compensated because the families need that money.”

She said afterwards that “in catastrophic outcomes such as cerebral palsy it should be every child, every time. And the first and fundamental consideration should be providing healthcare to those children, not requiring parents to go through a long, long court process.”

Dr Mahony added that the difficulty for everyone in a court case was that “you’re pitting doctors against their patients”.

“Ireland is different to other countries ins that it is has a very high rate of claims, but also a high rate of quantum in terms of settlement of those claims and very high legal fees, particularly on the plaintiff side.”

She said they were no longer defending cases because of the costs involved. “It’s too expensive to go to court, so we’re just settling.”

“The issue is the system we have,” she said. Families needed to be treated immediately and care for the baby should be completely independent of the requirement to obtain sufficient money for that care through a court settlement. “That serves nobody.”

She said an Oireachtas review in 2015 looked at how to improve the medical/legal system and considered options such as mediation and caps on claims.

It was quite disappointing for staff, she said, that number six on the list of options was an increase in resources, “because we have the lowest number of obstetricians in the OECD”.

“We have a current fertility rate of about 14 per 1,000 which would be at the upper end of European norms, even though the rate has been falling since 2010. Germany for example has a rate of eight per thousand.”

At the meeting Dr Niamh Humphries of the Royal College of Physicians in Ireland called for Ireland to start measuring the levels of doctor emigration and noted that in 2015 the Medical Council issued 1,881 certificates of good standing to doctors interested in working abroad.

High numbers of doctors were exiting the profession and 50 per cent of consultants were replaced due to resignation rather than retirement, she said.

In the last decade the number of doctors trained each year in Ireland rose from 305 to 727 but the State cannot retain them. In 2016, of 84 consultancies advertised 22 could not be filled.

Ireland has the fourth highest reliance on internationally trained doctors - those educated outside the State - after Australia, New Zealand and Israel.

It was stressed that the speakers’ participation in the meeting was not an endorsement of Mr McAleese or Fianna Fáil, but that they were participating in their capacity as experts in their fields.