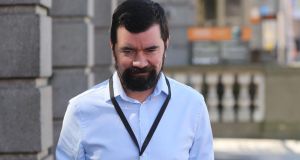 Green Party TD Joe O’Brien said there were a lot of sticky issues to deal with over the next week. Photograph: Nick Bradshaw

Fine Gael, Fianna Fáil and the Greens have lowered expectations of agreeing a programme for government within the next seven days because of serious pinchpoints which have emerged in negotiations including over agricultural emissions.

Sources close to the talks say there was slower-than-anticipated progress over the weekend with no resolution on key areas in finance and social protection such as how to handle the growing State deficit, the distribution of carbon tax, and the State pension age.

Following a pause in the talks process on Sunday, which allowed officials from each party to begin drafting agreed text, negotiations will resume on Monday, with all three two-hour sessions focusing on agriculture.

The sector is responsible for a third of all greenhouse gas emissions in the State but there are marked differences in the approach of the Green Party on the one hand, and Fine Gael and Fianna Fáil on the other to achieve reductions.

Speaking on RTÉ’s The Week in Politics, Green Party TD Joe O’Brien said that until now the parties had been dealing with easier issues.

“It’s important to say this is not a fait accompli. We’ve got a lot of sticky issues to deal with over the next week or so. Having an agreement by the end of the week is a target; it’s probably an optimistic target from my point of view,” he said.

He said Fianna Fáil and Fine Gael had some distance to go before his party could put a deal to its membership.

While the Greens have been very careful not to mention any possible culls, their manifesto setting out an alternative approach to farming envisages a smaller national herd.

The two bigger parties have large support bases in the agriculture community and have favoured higher emissions reductions in other areas to allow less of a shock to current agricultural practices. The Greens’ manifesto has argued for substantial reductions within agriculture in order to meet its aim of reducing overall emissions by the State by 7 per cent per annum.

“There are going to be a few big pinchpoints during the next few days and that is going to be one of them,” said one source. “We are doing our best to meet the deadline but there are still many things that need to be resolved.”

Speaking on RTÉ’s This Week on Sunday, Fianna Fáil deputy leader Dara Calleary said negotiating teams would do their best to bring negotiations to a conclusion.

“Differences can be bridged. That is what negotiations are about,” he said.

“A stitch in time saves nine. We are putting the stitches in now to make sure we have a strong platform for a stronger world.”

Fine Gael Minister of State Patrick O’Donovan said there was no immediate panic but all three parties had to be sure the programme for government would pass all hurdles, including the approval of their respective party memberships.

In discussions on finance, there were clashes on the question of the deficit, with the Greens arguing it should be allowed increase until recovery had been achieved, rather than imposing austerity measures.

However, the two other parties argued it would have to be dealt with by 2023 at the latest, pointing out that to do otherwise would have the potential to cause reputational damage when it came to borrowing on international markets. In comments on Sunday that were received as giving some movement on the issue, Mr O’Brien said “working down the deficit is important, but it should not be the number one aim of the next government”.

The issues over how to distribute the proceeds of carbon tax, the pension age, as well as the Greens’ proposal to spend 20 per cent of the transport capital budget on cycling and walking, have not yet been agreed.