Citizens’ Assembly is discussing whether Ireland should introduce fixed-term parliaments 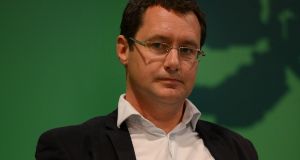 Dr Eoin O’Malley, School of Law & Government, DCU told the Citizen’s Assembly the timing of an election is crucial in determining if, or how much, support the Government party drops after an election. File photograph: Brenda Fitzsimons

The power to dissolve the Dáil and call an election tends “ to benefit the taoiseach’s party”, the Citizens’ Assembly has been told.

The group of 99 people are discussing the topic of fixed-term parliaments, as part of their final discussion.

The group is hearing from a panel of political science experts and holding roundtable discussions, ahead of a vote on the topic on Sunday.

Addressing the group, Dr Eoin O’Malley, associate professor of political science in Dublin City University, said the current power to dissolve the Dáil given to the taoiseach tends to benefit the party in Government.

This is different to “fixed-term” parliaments like the European Parliament which has elections every five years, or the United States Congress.

The President of Ireland can refuse a request to dissolve the Dáil, and has threatened to do so in the past when they felt an election was not necessary, Dr O’Malley said.

When to go to the polls is one of the key questions that sits in the back of every taoiseach’s mind. Currently the Fine Gael confidence and supply deal with Fianna Fáil is due to expire after the agreement’s third budget this October.

Generally there is a “cost of ruling” in the support for the Government party or coalition partners, of around 4 per cent, Dr O’Malley said.

“The act of governing very often involves making compromises and tough decisions”, so parties can often face a loss of seats in the election after they entered Government, he said, according to political science studies.

However, the timing of an election is crucial in determining if, or how much, support the Government party drops after an election.

“If a Government goes to full term the loss to the party is three (percentage) points, where if you’ve lost confidence the loss is six points” he said.

“If the Government falls by the taoiseach’s choice the loss is closer to zero”, he said, which places “significant” power in the leader of the Government’s hands.

“The difference between not losing many votes and losing six percentage points of votes, that’s quite big and that’s quite important, and would suggest that the ability to call an election is pretty important for a taoiseach,” Dr O’Malley said.

The effect of not having fixed-terms of parliament on policy, is that in the back of every politicians’ mind will be the chance an election could be called, Dr O’Malley said.

The power to dissolve the Dáil can only benefit the taoiseach, if they are in a strong position of public support, he said. Other factors like junior coalition partners blocking a taoiseach going to the polls, for fear they will lose seats, also have to be taken into account.

“The power effects of the right to dissolve the Dáil is highly contingent. It really isn’t a big club that we give a taoiseach, that big club can be turned into rubber if the taoiseach’s party aren’t doing well in the polls, or if there’s an issue on which the taoiseach wouldn’t want to go to the country on” Dr O’Malley said.

The Citizens’ Assembly has discussed Ireland’s abortion laws, the future care of older people, and climate change in previous sessions.