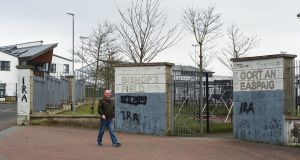 At 62, Kevin Campbell still lives in the house in Derry’s Creggan estate where he was born and raised. Last weekend that home came under attack when his car was set on fire in the driveway.

His 16-year-old daughter woke in the early hours of the morning and saw the flames through her bedroom window.

“It could have been a tragedy,” says Mr Campbell.

The PSNI has said it is working to establish a motive for the attack; Mr Campbell has no doubt dissident republicans were to blame.

A community worker, Sinn Féin councillor and former mayor of Derry, he condemned as “dangerous and disgraceful” petrol bomb attacks on police during an illegal dissident republican parade on Easter Monday.

As the colour party of 14 masked men in paramilitary-style uniforms made their way through the estate, groups of young people hurled petrol bombs at police vehicles.

Seven men aged 29-64 were arrested and charged with taking part in an unnotified public procession.

Mr Campbell was among many in the political sphere who criticised not only the violence, but also the long-term implications for the youths involved.

He has challenged Saoradh – which describes itself as a revolutionary Irish Republican Party – over the attack; it has denied responsibility.

“This action would quite simply be counter-productive to our objective of building the credible republican alternative to the status quo that Saoradh presents,” the organisation said.

The construction of Creggan, a large nationalist estate on Derry’s Cityside, began in the late 1940s to house the population overspill from the Bogside. It’s estimated that at one time 15,000 people lived in its 3,000 houses.

Six of those killed on Bloody Sunday came from the area, and all 13 killed on the day were buried from its St Mary’s church. Ranger William Best – a teenage soldier shot by the Official IRA – was from the estate, as was Michael Devine, who died on hunger strike in 1981. Among the local girls was Eurovision winner Dana.

Like many young men from the estate, Mr Campbell joined the IRA. He was interned and spent time in jail for possession of a firearm and, later, for possession of explosives. He was released in Christmas 1994, just after the first IRA ceasefire.

He remembers well the Creggan of the time.

“It was just coming out of conflict, there were still British soldiers on the streets, but slowly but surely demilitarisation was happening, and unemployment was shocking.

Today, Mr Campbell works in what is still known locally as the Corned Beef Tin, named after an original building shaped like a tin of corned beef.

Rebuilt three years ago at a cost of £700,000, it is now a multipurpose centre which is home to the Creggan Neighbourhood Partnership and other agencies providing community and voluntary services in the area.

Beside it on Central Drive – Creggan’s main street – is the Bishop’s Field sports centre, and beyond is a healthy-living centre.

“There’s all that development, so when people say the wains have nothing to do I’m sitting scratching my head, because there’s millions of pounds been channelled into this community,” says Mr Campbell.

While unemployment is an issue – according to the most recent figures from the NI Statistics and Research Agency, the unemployment rate in the Derry and Strabane area is 4.8 per cent as compared to 2.4 per cent in Northern Ireland as a whole – rates have been declining since 2013.

While Mr Campbell says there is still much to do to attract jobs to the area, he also feels younger people fail to realise how far the area has come.

“The generation coming up now don’t see it, because they were born into this,” he says.

Easier to see is the newly-sprayed graffiti in Central Drive. Slogans such as “INLA – join your local unit” and “no dealer is safe” have appeared on walls in recent weeks.

For Mr Campbell this “sloganising” which, complemented with social media activity, helps draw young people into the ambit of dissident groups.

“Some of them are vulnerable to that sort of thing, and the dissidents also set up youth wings so there’s a level of indoctrination there,” he says.

“There’s a lot of manipulation by these groups, a lot of sloganisation, intimidation, the shooting of so-called drug dealers.

“A lot of these people would walk around with their chests out but they’re not going anywhere.”

While Mr Campbell acknowledges a level of support for dissident republican groups within the estate, he believes the “rumour mill” and images of arrests and a woman being injured at a parade in Lurgan two days previously exacerbated tensions in Creggan ahead of Easter Monday.

“People thought the same thing was going to happen here, so people came out to spectate, and others came out for the recreational rioting.

“The group knew what they were doing, they went ahead and put the masks on, and the outworkings of that was that the young people ended up rioting.

“They’ve made the snowballs but they’re not going to throw them, they’ll get the young ones to do that, and it’s the young ones who’ll end up in the courts.”

The Police Service of Northern Ireland (PSNI) said the petrol bomb attacks were “pre-meditated”, and that the PSNI had attempted to engage with the parade’s organisers, who had instead claimed police had informed them the parade would be stopped – something the PSNI said was “patently untrue”.

“This can only be viewed as an attempt by those behind the parade as a bid to raise tensions in the area,” said PSNI chief inspector Ivor Morton.

Exact numbers involved in dissident republican activity are difficult to gauge. The PSNI’s most recent set of Security Situation Statistics, published last month, describes the level of security-related incidents in the North as lower and relatively consistent during the past decade as compared to the preceding one.

While the number of security-related deaths, shooting and bombing incidents and paramilitary-style assaults have all fallen in the last 12 months, “a significant threat still remains”, the report found.

Security journalist Eamonn MacDermott puts the numbers of core supporters at “not more than a couple of hundred people”.

“There is a hard core of support for dissidents in areas like Creggan. Some of them are former Provisional IRA members who feel disaffected about the peace process, and a certain amount of support was built during the days of Republican Action Against Drugs.

“The level of support was enough to have elected Gary Donnelly, who was very much identified with dissident republicans, as a councillor, so you can’t diminish that and say they have no support, but that would be well outweighed by the support for Sinn Féin,” he says.

Elected as an independent councillor in Creggan in 2014, Mr Donnelly left Sinn Féin in 1998 to join the 32 County Sovereignty Movement.

“I’ve been heavily involved in community politics all my adult life,” says Mr Donnelly, “and during that election there was a feeling that a lot of blind eyes were being turned to state violence and that the whole community and voluntary sector was controlled basically by Sinn Féin.”

He condemns the attack on Mr Campbell’s car – “my position is that attacking any family home is wrong” – but argues that the Easter Monday parade has been taken out of context, as the “vast majority” of similar parades – including the previous year’s commemoration in Derry – have passed off peacefully.

“During that parade there were nearly 40 armoured PSNI vehicles which had saturated the Creggan estate and given what had happened in Lurgan young people reacted by throwing a small number of petrol bombs at police.”

“There is a lot of inter-community tension here and we need cool heads,” says Mr Donnelly.

Mr Campbell is more than willing to talk.

“If you have a gripe with me, come in, sit down and I’ll make you a cup of tea and we can have a debate and a discussion and thrash it out,” he says.

“You don’t have to send out people in the dead of night to burn my car or to try and intimidate my family.

“It’s about trying to reach out to these people and saying if you’ve a strategy, let’s see it, and explaining that this is not the way to go, that we had this in the past, but we’ve moved on and I think it’s time you moved on.

“It’s going to be two forward and one back, but it’ll not stop the community moving forward.”