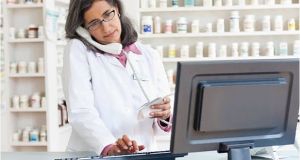 The contraceptive pill, patches and rings would be made available without prescription and without charge, regardless of eligibility, under the IPU proposal. File photograph: Getty Images

Pharmacists are seeking to deliver a State-funded free contraception service to women, including supplying contraceptive pills without prescription.

The proposal by the Irish Pharmacy Union (IPU) has been made to the Department of Health, according to a document seen by The Irish Times.

The contraceptive pill, patches and rings would be made available without prescription and without charge, regardless of eligibility under the proposal, which would represent a major change to the current situation where women need prescriptions for these products.

Such a change would likely be strongly resisted by GPs.

In accordance with the recommendations of the Oireachtas Committee on the Eighth Amendment, the Government has decided to provide free access to contraceptives as a measure to prevent unwanted pregnancies.

Minister for Health Simon Harris has already established a women’s sexual health group in his department to formulate proposals on a programme of free contraception for women.

One senior political source said the Government intends to implement a plan for a “massive increase in the availability of contraceptives – condoms basically”.

However, it is understood that changes to the way that oral contraceptive pills are provided to women would require legislative change.

The IPU’s proposal states that pharmacists could directly provide women with oral hormonal contraception pills, patches, rings and injections. All these items currently require a prescription but could be reclassified to be directly dispensed by pharmacists, under set circumstances, the IPU said.

Pharmacists have directly provided the “morning after pill” without the need for a prescription since 2011 – a move that was strongly opposed by GPs at the time.

The IPU proposal also says pharmacists would only be able to directly supply free hormonal contraceptives to women after undertaking additional training and according to strict criteria, based on international guidance.

It would not be a requirement for women to have previously been prescribed a contraceptive, under the IPU’s proposals, but access would initially be restricted to women aged 17 and over.

In return for providing the scheme, the IPU stated, it was its view that “given the professional input and the time involved in providing the service, consultation fees in line with those already paid for the EHC consultation to GMS patients (currently €11.50 plus ingredient cost and standard dispensing fee) would be appropriate”.

1 Election 2020: 10 key questions to ask candidates on your doorstep
2 Election 2020: Peter Casey to stand in both Donegal and Dublin West
3 Which jobs do teenage girls and boys aspire to have by age 30?
4 Eating out in Dublin – the homeless way
5 Independent TD Tommy Broughan announces retirement from Dáil
Real news has value SUBSCRIBE