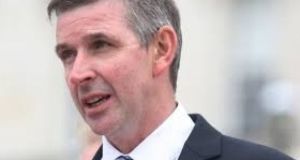 Ian Marshall is “a certainty” to secure one of the seats, according to one Seanad source

Former president of the Ulster Farmers’ Union and strong anti-Brexit campaigner Ian Marshall is expected to win a Seanad seat when two byelections are held later this month.

Mr Marshall, who works in Queens University Belfast in the Institute for Global Food Security, was approached by Taoiseach Leo Varadkar to accept a Fine Gael nomination.

“He is a certainty to secure one of the seats,’’ said a Seanad source. “He will receive support from outside Fine Gael.’’

The byelections will be held on Friday, April 27th, with the electorate members of the Dáil and Seanad.

The vacancies were caused by the resignations of Labour’s Denis Landy on health grounds, and Independent Trevor Ó Clochartaigh, formerly Sinn Féin, to take up a post as communications manager with TG4.

The frontrunner to take the other seat is former Fianna Fáil TD for the then Donegal North-East constituency, Niall Blaney.

Mr Blaney served in the Dáil from 2002 to 2011, when he stood down for personal reasons.

He comes from a Fianna Fáil tradition extending back to the foundation of the State. His grandfather, Neal, was a Fianna Fáil TD and close associate of Eamon de Valera.

Niall Blaney’s uncle Neil, was a longserving Fianna Fáil minister until he left the party after he was sacked from the Cabinet during the 1970 arms crisis. He later served as an Independent TD, as did Niall’s father, Harry.

Niall Blaney joined Fianna Fáil in 2006, amid a family split.

If he is elected to the Seanad, it would put him in a strong position to secure a Fianna Fáil nomination to contest the Midlands North-West constituency in next year’s European elections.

It is not clear whether Fianna Fáil and Fine Gael will do an electoral deal to divide up the votes in the byelections. It is understood the parties are in contact on the issue.

The RDS has nominated member Mary Redmond, as one of the nominating bodies in the agricultural panel where Mr Ó Clochartaigh held his seat.