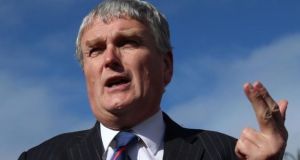 Jim Wells: ‘I am a dinosaur. I don’t believe in abortion. I do not believe it is right to kill babies in the womb.’ Photograph: Niall Carson/PA Wire

Democratic Unionist Party politician Jim Wells has said that he is prepared to campaign in the Republic against the repeal of the Eighth Amendment, saying that repeal would impact on Northern Ireland.

Mr Wells attended a ‘Save the Eighth’ rally in Dublin in March but says he kept well back from the crowd so as not to distract from the message of the demonstration.

Now, he says he will be “guided” by anti-abortion campaigners, such as Bernie Smith from Precious Life and Senator Ronan Mullen as to whether his presence would help or hinder the campaign against repeal.

“We can’t be seen to be having outside manipulation and influence but I think I would go if I was invited,” he said, adding that he would not do so if the anti-abortion campaign believed he would be “unhelpful”.

“If I was in the Irish Republic I would be the first person in the queue to defend the Eighth amendment. If it is lost it will have a profound impact on Northern Ireland,” he told The Irish Times.

Mr Wells resigned three years ago as Stormont’s health minister over the fallout from a recording at a hustings event in Co Down.

“The facts show that certainly you don’t bring a child up in a homosexual relationship. That a child is far more likely to be abused and neglected....”

He was then interrupted by uproar from members of the audience before continuing: “A child is far more likely to be abused or neglected in a non-stable marriage situation.”

He later issued a statement that said: “I accept that one line of what I said caused offence and deep concern.”

“I regret having wrongly made that remark about abuse and I’m sorry those words were uttered. The comment did not reflect my view nor that of my party.”

But on Monday Mr Wells said: “The accusation was that at a hustings event in Downpatrick I said homosexual couples abuse children. What I said was when homosexual or heterosexual relationships break down, children suffer.”

Mr Wells says he had to resign to “get the heat off the situation” as DUP candidates in the upcoming election could have lost out because of the controversy at the time. “It was my suggestion I fall on my sword,” he said. “I knew I had done nothing wrong.

“I feel rather aggrieved and I am annoyed with the leadership and with SPADs and press officers who have become far too powerful in the party.

“A promise given to me that I could return as health minister was not fulfilled.

“We agreed I would resign, let the dust settle, get vindication and I would come back.

“I wrote to the DUP three times. First two were ignored, then I was brought in by (deputy leader) Nigel Dodds and told I wasn’t coming back.

“The party have let me down big time.”

Now, he says that the DUP view him as a dinosaur with inconvenient opinions: “I am a dinosaur. I don’t believe in abortion. I do not believe it is right to kill babies in the womb.

“I believe Fred should marry Freda rather than Fred marrying Paul. I don’t believe in legalising cannabis, casinos or all night drinking.

“The world is changing and I accept that. I am not convenient in that I hold to traditional view points.

“I am like the embarrassing uncle sitting in the corner at the Christmas party.

“I accept my views are not mainstream any more. I accept that,” said Mr Wells, the MLA for South Down.