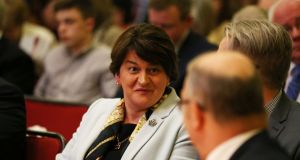 DUP leader Arlene Foster during an event to mark the 20th anniversary of the Good Friday Agreement, at Queen’s University in Belfast. Photograph: Brian Lawless/PA Wire

DUP leader Arlene Foster will appear before a public inquiry into the Renewable Heat Incentive (RHI) scandal in Northern Ireland on Thursday.

The Renewable Heat Incentive Scheme was set up in November 2012, and run by the North’s Department of Enterprise, Trade and Investment when current DUP First Minister Arlene Foster was its minister.

The non-domestic element of the scheme was designed to encourage firms, businesses and farmers to switch from fossil-fuel heating to biomass systems such as wood-burning boilers.

The Northern Ireland system, unlike a capped system in Britain, was flawed because there was no limit on usage and subsidies were over-generous.

In short, for every £1 that users spent on their green heating systems, they got back £1.60 in subsidies. It was described as “cash for ash” or “the more you burn the more you earn”.

Ms Foster was Northern Ireland’s minister for enterprise when the so-called ‘cash-for-ash’ scheme was set up and was leader of the DUP when the scandal broke in 2016.

The RHI ended up paying out more than it cost to fuel wood-burning boilers and this led to the collapse of powersharing following a fall out between Sinn Fein and the DUP last January.