‘20 years ago, some brave people cleared a space for the miraculous’ 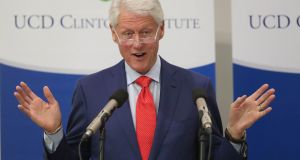 Former US president Bill Clinton at UCD on the eve of the 20th anniversary of the Belfast Agreement. Photograph: Niall Carson/PA Wire

Former US president Bill Clinton has urged political leaders in the North to compromise in order to rescue the powersharing institutions.

Speaking in Dublin, Mr Clinton said it was “so easy to underestimate the fragility of a system you have come to take for granted”.

For politicians the temptation was to “double down and bargain harder”, he said, but “in the end you have to be willing to give”.

He continued: “Compromise has to be a good thing, not a dirty word. And voters have to stop punishing the politicians who make those compromises and start rewarding them.”

Mr Clinton, who played a key role in the events which led up to and followed the Belfast Agreement, was speaking at an event at University College Dublin to mark the 20th anniversary of the agreement, hosted by the Clinton Institute at the university.

“My first plea is, this thing has lasted, don’t let it go. You can’t let it go by doing nothing,” he said.

“One of three things is going to happen: fall apart, or stay in purgatory – denied dreams, broken hopes, and you’ll just rock along, caught on a sea of lost chances. If you do that slowly you’ll lose your democracy in the North.

“Or three, everyone can rear back, settle down and make a new beginning,” he said. The agreement, he said, remains “a beacon of hope for the people of Northern Ireland, for Europe and hopefully for the wider world”.

“But people in a position of influence have to decide what to do with it,” he said.

Mr Clinton said that “20 years ago, 17 hours late, some brave people cleared a space for the miraculous. You should fill it.”

Recalling the achievement of the agreement, he paid tribute to the political leaders in the North, Ireland and the UK. He said that they took decisions which in many cases were unpopular with their own supporters.

“And it was not free,” he said. “These deals require sacrifice and compromise. It’s never easy and it’s not free.”

Citing the decline of the UUP and the SDLP in the wake of the agreement, he said: “David Trimble was not a dummy and John Hume certainly wasn’t. They knew they were putting their political parties at risk, and they did it.”

He also paid extensive tribute to former US special envoy to Northern Ireland George Mitchell, referring to his “painstaking work” to build confidence among the parties.

Praising the agreement’s “brilliant system of shared decision-making”, he said there had never been an agreement quite like it before, adding that “we should be grateful that it has held”.

However, Mr Clinton said that the progress enabled by the agreement could not be taken for granted, and he warned repeatedly that the current impasse [at Stormont] could not be allowed to last indefinitely.

“There is a political limit imposed by constant paralysis,” he said.

Mr Clinton entered to a standing ovation from the audience of students, staff and invited guests for his lecture.

Guests included an array of business and academic figures including businessman Denis O’Brien, a friend of the former president.