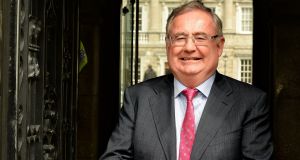 A long-running RTÉ programme on politics which former Labour leader Pat Rabbitte once said was watched only by “drunks and insomniacs” may soon come to an end.

Oireachtas Report is a half-hour programme that reports on highlights of that day’s sittings in the Dáil, Seanad and committee rooms. It is broadcast late at night, often after midnight.

Yesterday, senior RTÉ news executives disclosed to Dáil Deputies and Senators that the broadcasters reports on the Oireachtas might be migrating from TV to online.

RTÉ’s head of news Jonathan Williams, along with senior colleagues, yesterday gave a presentation in Leinster House of the broadcaster’s plans for political coverage.

It is proposed by RTÉ to end the programme and replace it with comprehensive online coverage, which will give more immediate reports of proceedings, that will make the reports more timely and relevant.

It is understood that the RTÉ team emphasises there would be no reduction in resources or staff covering the Oireachtas.

“The proposal is for real-time online coverage. That is bringing the reports to where the audience is. Audience figures demonstrate very clearly the extent of the growth of online consumption and social media platforms,” said a source.