Pain relief policy should not be decided by radio shows, says Minister 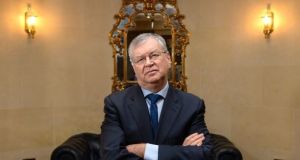 Fianna Fáil leader Micheál Martin raised the issue of Versatis pain relief patches and said ‘it seems that the only patient advocacy service in the country is Liveline, courtesy of broadcaster Joe Duffy’.

Policy on medication should be “decided by doctors rather than radio shows”,

Minister for Health Simon Harris said in reference to the ongoing debate about pain relief drug Versatis on RTÉ’s Liveline.

Mr Harris said hundreds of people had been put back on Versatis pain relief patches following appeals by GPs.

Fianna Fáil leader Micheál Martin raised the issue when he said “it seems that the only patient advocacy service in the country is Liveline, courtesy of broadcaster Joe Duffy”.

He said there had been “extraordinary contact in recent weeks from patients throughout the country over the removal of Versatis pain relief patches and medication from thousands of patients in a cost-cutting measure by the Government”.

Mr Martin said it was estimated there was 90 per cent in savings by removing the pain relief drug but “from a patient perspective, anyone listening to Liveline in recent weeks will have been struck by the agony and genuine distress caused to patients and families.

“These people of all ages got great pain relief from this particular medication. Where was the patient advocacy informing this decision?”

But Mr Harris said it was not a decision taken by Government but by “the medicines management programme, which is made up of clinicians”.

The Minister said the decision was a clinical one made on the “appropriate use of Versatis, a patch that had been used for conditions it was not previously meant to be used for”.

He pointed out that “we were actually spending more and using more in this country than the entire United Kingdom”.

Mr Harris acknowledged Mr Martin was making a point about compassion for those using the medicine and for whom it was providing clear pain relief.

“I wish to make the point that there is an appeals process. Already, general practitioners can apply using an online system to have the application assessed. That is turned around within two days.

“Hundreds of people have been put back on the patches as a result of it.”

He said: “ It is important that we follow clinical advice and that we let our policy on medication be decided by doctors rather than radio shows.”

Later, the Minister said “I hope that the answer I gave here earlier did not give anyone the wrong impression”.

Responding to a special notice question on the issue Mr Harris said he was “very concerned about the worry and upset I have heard from patients. I want them to know that I am listening and I want them to receive the compassion and treatment they need.”

He added: “I did not mean to be dismissive of people feeling that they had no option but to call a radio programme that is rightly highlighting an issue that is concerning people, but I have always been clear that when it comes to our citizens accessing medication, I want them to be able to do that through engaging with their doctors and in this case their doctor engaging with the medicines management programme.”

He said the point he was making was that an application and appeals process was in place that doctors could to get these patches for patients. Almost 700 patients in this country have gained access to these patches as a result of that process.

When the patch was first issued it was licensed for use in cases of shingles and “it was clearly a clinical cause of concern when the reimbursement cost increased from €9.4 million in 2012 to over €30 million in 2016, mostly from unlicensed use of the patch”.

The Minister said that as of Tuesday “over 220 appeals have been granted, which represents over 61 per cent of appeals being accepted on clinical grounds. Nearly 700 patients are receiving these patches despite that it is beyond the shingles indication.”