Foster insists DUP will not sign off on Irish Language Act 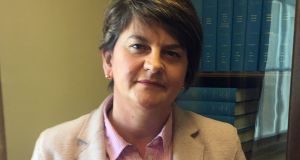 Democratic Unionist leader Arlene Foster has rubbished speculation about the shape of Irish language laws that might emerge from powersharing negotiations. Photograph: PA

Democratic Unionist Party leader Arlene Foster has rubbished speculation about the shape of Irish language laws that might emerge from Stormont’s powersharing negotiations.

Mrs Foster said rumours about what legislation might look like were “not grounded in any sort of reality”.

In an interview with the Press Association, the DUP leader again insisted her party would not sign off on a stand-alone Irish Language Act — a key Sinn Féin demand throughout the 13-month impasse.

She also ruled out any laws that would require bilingual road signs in Northern Ireland; compulsory teaching of Irish in schools; or quotas of Irish language speakers within the civil service.

Stormont’s former first minister also moved to temper expectations that a deal to restore devolution is likely this week.

“I am hopeful that we will move toward devolution again,” she said.

Mrs Foster also made clear that if devolution is restored she expects to be first minister of the new administration. Sinn Féin had previously ruled out her return to the post while an inquiry into a botched green energy scheme continued.

“I am the leader of the Democratic Unionist Party so therefore I will be the person that’s put forward by the party to be first minister,” she said.

The Prime Minister and Taoiseach travelled to Stormont on Monday to encourage the region’s parties to finally end the deadlock that has left Northern Ireland without a functioning government since last January.

Theresa May urged them to make “one final push” to strike a deal to salvage powersharing.

Mrs Foster said while the leaders were welcome, their presence proved a “bit of a distraction” as it interrupted negotiations. The DUP leader said the governments had been told in advance of their trip that “the deal wasn’t done”.

The DUP did not meet Taoiseach Leo Varadkar on Monday but Mrs Foster rejected the suggestion that recent frayed relations between the two over Brexit was the reason. She said she did not feel it necessary to meet Mr Vardakar because the negotiations were touching on matters solely related to internal matters within Northern Ireland.

Sinn Féin wants a standalone piece of legislation to protect speakers — an Irish Language Act — but the DUP has long insisted it would only countenance new laws if they also incorporate other cultures, such as Ulster Scots.

The mood music emerging from the negotiations has been more positive in recent days, with growing anticipation that a resolution is close.

“Some of the speculation yesterday wasn’t grounded in any sort of reality at all,” she said.

“There won’t be a stand-alone Irish Language Act — we have always made that very clear, people aren’t going to be forced to learn Irish, there isn’t going to be Irish compulsory in schools, there’s not going to be bilingual signs or quotas in the civil service.

“Some of the speculation has actually caused a lot of concern right across the community in Northern Ireland and it’s important that we say that that is not based in reality.

“What we are trying to find is an accommodation and a way forward that values those people who are Irish speakers but doesn’t impinge on the lives of those who aren’t Irish speakers and I think that’s important.”

Mrs Foster said language was not the only remaining sticking point, and said gaps still had to be bridged on other wrangles between the two parties.

He said talks were at a critical stage and the party was focused on achieving a deal.

“However they want to describe it, the DUP know that agreement requires an Acht Gaeilge.

“The DUP need to make up their mind about whether they are up for a deal or not.

“This is a time for leadership and calm heads and there is a responsibility on all involved not to react to some of the noise from people who simply don’t want an agreement.” – PA