Local authorities given ‘less than half the funding they need’, says TD Robert Troy 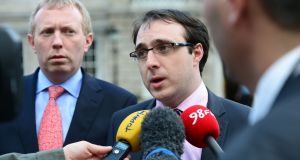 Fianna Fáil TD Robert Troy: “Many regional and local roads are in a dreadful state as a result of the Government’s failure to invest in roads infrastructure.” Photograph: Alan Betson

The Government has indicted it will not oppose a Fianna Fáil motion on regional and local roads later this week – the third time it has ceded to the Opposition on rural issues in the past week.

The Fianna Fáil motion relates to its claim that the Government failed to invest in roads infrastructure and, as a result, local and regional roads across the country were in poor condition.

The motion calls for increased investment in roads in addition to regular updates from the Minister for Transport Shane Ross to the Reactions.

Speaking in advance of the debate, Fianna Fáil TD and spokesperson for transport Robert Troy said: “Many regional and local roads are in a dreadful state as a result of the Government’s failure to invest in roads infrastructure.”

He cited a recent report carried out by the National Oversight and Audit Commission which found that almost 70 per cent of regional roads have serious structural and surface defects.

“Over the last five years the Government has on average provided local authorities with less than half the amount of funding they need to maintain their roads.”

He said this was is despite a commitment made in the Programme for Government to increase the capital budget for regional and local roads by approximately 50 per cent.

“At least an additional €163 million is needed each year to maintain our road network to safe standard. The motion we have put to the Dáil calls on the Government to significantly increase funding for regional and local roads through the Capital Investment Plan.

The motion won support from other Opposition parties and from Independents. At the weekly Cabinet briefing, the Government spokesman indicated it would accept the motion and would not be seeking any amendment.

Ireland’s network of regional and local roads is is almost 91,000 km in length and carries over half of all traffic.

Mr Troy emphasised that it was not a rural-Ireland issues, as most roads in Dublin and in larger cities and towns were also classified as regional or local.

He said that under-investment in addition to adverse weather conditions over the past number of years had resulted in the conditions of many roads deteriorating.

The Government has come under sustained criticism in the past week for claimed neglect of rural Ireland in its transport, development and urban plans. Sinn Féin Deputy Eoin Ó Broin was highly critical of the Government for what he said was avoidance of a vote on the National Planning Framework. He produced the legislation underpinning it which, he said, clearly stated that the Government shall seek the approval of the Oireachtas for the plan.