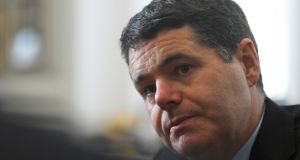 Ed Brophy, the former chief of staff to Labour tánaiste Joan Burton in the last Government, is to become a senior adviser to Fine Gael minister Paschal Donohoe.

Mr Brophy served in the last Government as an adviser to Ms Burton in the Department of Social Protection, becoming her chief of staff when she became Labour leader and tánaiste in 2014.

He was also a central member of Labour’s campaign team at the last general election. His decision to join a Fine Gael minister has caused surprise and some annoyance among former Labour colleagues. Having suffered heavy losses and returned with just seven seats after the 2016 general election, Labour has struggled to find a voice in political debate since and made little impression in opinion polls.

Since leaving Government, Mr Brophy has contributed occasional articles on politics to the Sunday Independent, while working as a partner in Accreate, an executive recruitment company.

Special advisers in this government are normally appointed at principal officer grade, with a salary range of €78,000-€96,000 a year.