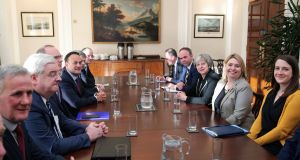 Taoiseach Leo Varadkar declined to answer when Labour’s Joan Burton demanded an explanation for why there were no female Government representatives at Stormont on Monday.

Ms Burton referred to a photograph in Tuesday’s edition of The Irish Times which showed a photograph of the Irish and British delegations on either side of a table for talks on the formation of the Northern Executive.

Mr Varadkar led the all male Irish delegation of six representatives while the UK delegation in the photo led by British prime minister Theresa May included two men and three women, among them Northern Secretary Karen Bradley.

Ms Burton said the Government was a “disgrace” for not having female representation in that picture, describing the occasion as historic.

She said it was especially disappointing that there should be no women 100 years after women had been given the vote and the right to run for election.

Ms Burton said there should be “gender sensitivity”.

Demanding an explanation for the lack of women, Ms Burton expressed surprise there were no women in the photo.

She asked Mr Varadkar “what went wrong”, especially “as you arrange these photo ops so meticulously”.

She said the Taoiseach owed the Dáil an explanation and it was “not acceptable at this level given the amount of time you put into planning your media and communications”.

Mr Varadkar, who was responding to a number of questions from opposition leaders, did not reply to Ms Burton’s questions.