Renewed commitment to no hard border after May and Varadkar meet 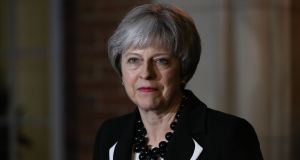 A comprehensive free trade and customs deal between the UK and European Union was the best way of avoiding problems over the Northern Irish Border after Brexit, Taoiseach Leo Varadkar has said.

Following talks with British prime minister Theresa May in Belfast on Monday, Mr Varadkar said both governments agreed that was the best approach and officials would “explore solutions” to the issue over the coming weeks and months.

Ms May said the agreement reached on the first phase of the Brexit process in December still applied and “we are both committed to ‘no hard border’”.

She said the best way of achieving that was “in the context of the overall UK-EU economic partnership”.

Ms May told The Irish Times that the December agreement with the Government “does still hold”.

“We are both committed to no hard border,” she said, adding that her preference for avoiding a hard border was “within context of an EU-UK economic partnership of the future, and that is what we are going to be working at”.

The EU’s chief negotiator Michel Barnier has said that checks at the Border will be “unavoidable” following Ms May’s decision to leave the single market and customs union under her Brexit strategy.

The December deal on the first phase of the EU withdrawal talks signalled that the issue could be dealt with in one of three ways: through the overall Brexit deal as Ms May wants, through some “specific solutions” proposed by the UK government or by maintaining “full alignment” with single market and customs union rules.

Mr Barnier confirmed that Brussels is drawing up a legal definition of the regulatory alignment that must continue between Northern Ireland and the EU. London had provided no proposals for the kind of technological fix which could get around this, Mr Barnier said last week.

But Mr Varadkar and Ms May said their governments were working on “option A” – for the issue to be resolved as part of the overall Brexit deal.

He said: “What we agreed to do is co-operate at official level, the two governments exploring together how we can realise the commitments and guarantees that were given in December that a hard border between Northern Ireland and Ireland would be avoided.

“We have always said, and this is where the British and Irish governments are very much agreed, that the best way to achieve that is in the context of a new relationship between the UK and EU.

“So we are going to talk about that, but obviously any negotiations will have to be done through the Barnier task force and the EU27.”

Mr Varadkar said the “tricky part” of the December agreement was going to be how to avoid the hard border.

“It’s very much our view that needs to be stitched into the withdrawal agreement,” he said.

Both governments wanted a a new relationship for a comprehensive free trade and customs agreement, no hard border and no new barriers to trade east and west.” – Additional reporting: PA