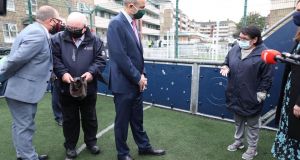 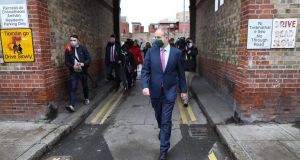 Between an illicit rave last Saturday night and a visit from the Taoiseach on Thursday morning, 23 bin bags of rubbish had been removed from a small five-a-side soccer pitch in Oliver Bond flats in Dublin’s south inner city.

Make that 23 bin bags and one doggy-do bag. For just before Micheál Martin arrived to see at first hand the scene of last Saturday night’s bedlam, another unauthorised event took place. Seconds before the Taoiseach’s arrival a local pooch decided the best place to make a deposit was the entrance to the pitch.

Cue mild panic among the local reception committee who had worked tirelessly to clear the estate’s only ball-playing area of hundreds of bottles, cans, shards of glass, gas canisters and other detritus discarded by the revellers.

But the deposit was overstepped and overlooked by a Taoiseach who might have been a bit slow in coming to visit the complex but who made up for that by spending well over an hour getting a tour, and meeting a large group of locals.

The residents of this south inner city complex were mainly happy to see the Taoiseach and explain how they were hit on the double by the rave. Firstly, they had to endure six hours of prolonged noise, disturbance and anti-social behaviour. And then the people who lived there got blamed for it on social media, despite having nothing to do with it.

The Taoiseach was mainly in listening mode. As he walked through the rain, one person shouted an expletive from a balcony. But that was as negative as it got.

Irish leaders tend to be well rooted in the community. Charlie Haughey was from Donnycarney and famously met Tony Gregory in the north inner city. That’s where Bertie Ahern had his constituency. Enda Kenny also got involved with the north inner city during his tenure. The meetings turned out to have wider agendas than one rave on one weekend during Level 3 Covid alert. It turned to regeneration of Dublin’s biggest flats complex and how soon it will be done.

“Other areas actually have had regeneration projects carried out across the country. I do think we need to accelerate and make sure that happens within the timelines outlined,” Martin agreed.

Brendan Kenny, deputy chief executive of Dublin City Council, said a plan to regenerate the complex was in motion but there were plans in the meantime to make improvements.

A resident named Margaret (she did not want to give her surname) said the complex had suffered in recent years, including having rat infestation.

“It’s dilapidated. We don’t get painted. We have not got anything done in years. We need funding now to have it look respectable outside. People can look after the insides themselves. Our outsides are disgraceful. We had rat infestation. They were coming up from the sewers in broad daylight,” she said.

“We are glad that Micheál did come as it will help highlight a situation,” she added.