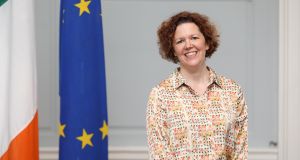 When Irish Ambassador to Sierra Leone and Liberia Lesley Ní Bhriain was posted to West Africa in September 2019 she planned to see her husband and two children, who remained in Ireland, as regularly as possible.

In 2020, the family had organised that Ní Bhriain would fly home to Ireland at the end of March while her family would visit Freetown, Sierra Leone’s capital, over Easter. Then, Covid-19 happened.

“It was like a ton of bricks personally but on the other hand, this is part of the job. It’s what we sign up for,” Ní Bhriain told The Irish Times. “Those of us in Sierra Leone and Liberia took on this assignment thinking about what would happen if Ebola came back. So I suppose we were probably better prepared than a lot of our colleagues.”

Ní Bhriain is just one of hundreds of Irish diplomats and aid workers who found themselves stranded thousands of miles from their loved ones over the past six months as nations worldwide closed borders and airports in response to the rapidly spreading threat of Covid-19. In Sierra Leone, the last international flight left on March 22nd.

“During Ebola lots of people left, embassies closed and businesses pulled out,” Ní Bhriain recalls. “But the signal you give by leaving is a profound sense of abandonment.”

Eight out of ten people in Sierra Leone don’t have running water while more than three quarters of the population work in the informal sector, she says. Lockdown measures, as we have experienced them in the western Europe, do not work, she adds.

“To be honest death and illness are a fact of life in Sierra Leone. There’s cholera, there’s maternal mortality that is the second highest in the world. Covid was just another thing on the list of illnesses that people are incredibly vulnerable to. We had two lockdowns for three days each and it was immediately apparent that people couldn’t cope. For many people going out to work is a matter of survival.”

Food security has also become a major issue for Sierra Leoneans during the pandemic, says Ní Bhriain. A recent national survey found 63 per cent of households in the country do not have regular access to food, up from 48 per cent in January. Meanwhile, a number of doctors and nurses have died from the virus in a country with one of the world’s lowest ratios of healthcare workers to population.

In August, the Department of Foreign Affairs announced the Irish Government had invested, through Irish Aid, more than €123 million to the international response to the Covid-19 pandemic following the World Health Organisation’s appeal in February. Ireland also pledged €18 million to the Gavi Vaccine alliance, an organisation set up to improve access to vaccines for children living in the world’s poorest countries.

In Mozambique, the Irish embassy in Maputo had worked with the country’s health ministry to improve training in 14 hospitals, while in Sierra Leone, Irish efforts focused on providing support around Covid-19 awareness and hand-washing facilities along with food assistance in coronavirus treatment centres and vulnerable households.

Citing the World Health Organisation’s Dr Mike Ryan, Ní Bhriain reiterates how overseas development aid has become more important than ever. “This virus cannot be dealt with in isolation. I would say it’s absolutely time to be helping other people. Nobody is safe until everyone is safe.”

Irish Aid’s director general of development cooperation Ruairí de Búrca says countries must work in collaboration with one another to eradicate Covid-19. This includes support for the world’s most vulnerable nations, he adds.

What’s more, back in Ireland the HSE relies hugely on doctors and nurses who come from many countries support by Irish Aid. “There is a debt of honour to these countries who have given us health workers. How we manage the pandemic also needs to be informed by the WHO which gives updates on science.”

“Using development aid to invest in vaccine research and ensuring those less well off than us have access to a vaccine is in our self-interest. We won’t be able to eradicate this virus alone, we must work with others to make sure this is a global effort,” De Burca says.