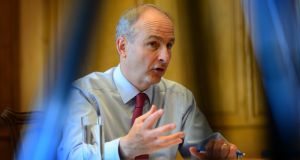 It was 1992, and the Troubles were raging. Micheál Martin was three years a TD. There were tentative attempts to make politics work to solve the conflict, amid whisperings of a peace strategy in the IRA, but they were barely audible through the drums of war.

The year had hardly begun when the IRA killed eight Protestant civilians who were working at a British army base at Teebane, Co Tyrone. Loyalists retaliated by shooting five Catholics at a Belfast bookmakers’ shop. And so it continued throughout the year.

At Corrymeela, a Christian-inspired and run centre devoted to peace and reconciliation in Co Antrim, 12 TDs and 12 unionist and loyalist representatives met for a weekend of face-to-face contacts.

It was “the Quakers” that facilitated it, Martin recalls. He met the late David Ervine, the former loyalist paramilitary and later influential advocate for peace and a political settlement, for the first time. “Your problem,” Ervine told him, “is that you have that southern nationalist guilt trip about the North and partition”.

“He hit the nail on the head – this idea that we had abandoned the North,” Martin says. The sides detonated a few myths about each other. One Fianna Fáiler described the unionists as dour and humourless (“They can’t even smile!”). The unionists said they knew that parish priests vetted the southerners’ speeches.

For Martin, whose interest in the northern question dated back to his student days when he had been part of a delegation that visited Belfast, it accelerated a process of re-examining “the old Brits out, 32-county republic, it’s as simple as that, the day will come” approach. In place of Fianna Fáil’s traditional fourth green field-ism would eventually grow a commitment to engagement with unionists and building North-South relationships in the broadest possible sense.

As Taoiseach and leader of Fianna Fáil, Martin has not abandoned the aspiration to a united Ireland but it comes a distant second to the immediate need to rebuild and forge a relationship of trust and co-operation with unionists and with the Stormont administration. This is the centrepiece of his Government’s northern policy, and one which finds expression in the recently constituted Shared Island Unit in his department. There is, conspicuously, no mention of a united Ireland in his Programme for Government.

Corrymeela, and other encounters, also convinced Martin of the need to build human bonds with unionists.

The Shared Island Unit, he says, is about working on those relationships, deepening them, improving them, showing that they can be of practical, measurable benefit

“The first night the Quakers didn’t quite understand our impulse for a pint,” he recalls. “They thought we’d be going to bed at 10 o’clock at night ... I could see Enda Kenny and Ervine looking around and going, ‘Is this serious?’

“So we gently said, ‘Is there any pub nearby?’ Eventually they had to ring a local publican – I think she had been raided by the RUC the previous night – and ask if she would open the pub in the interests of peace and reconciliation. And we got on like a house on fire. We need more of that.”

The Shared Island Unit, he says, is about working on those relationships, deepening them, improving them, showing that they can be of practical, measurable benefit on both sides of the Border in a way that has nothing to do with the constitutional question.

He talks animatedly of dialogue with the “new communities in the North”, “the growing centre ground”, the “new Irish” and women. “We need women’s voices to be heard.”

He wants the unit to commission research, not on attitudes to a united Ireland but on how the two jurisdictions work and where there may be fruitful collaboration: the health services; school curriculums; stuff that affects people’s daily lives. He wants to explore co-operation on enterprise – “We brought northern companies on trade missions” – and food safety and a host of non-constitutional issues. He is committed, he says, to a list of long-delayed joint infrastructure projects – roads, bridges, high-speed railways, greenways, the lot.

Later, he turns at length to the “economic disadvantage of loyalist youth”, citing the low level of school completion, and the broader problems of poverty, disadvantage and economic stagnation. “It needs almost a Marshall Plan to deal with it,” he says. “Unless we tackle that level of disadvantage, we’ll continue to have peace walls up.”

For the first time, his fluency on the subject deserts him.

“Sorry, I think, you know, when you say, a means to an end – it’s not actually a stalking horse to a certain political objective. It’s not.”

The certain political objective, of course, is a united Ireland.

He says many unionists, citing DUP leader Arlene Foster for one, have no “ideological objection to North-South co-operation. My view is that we just haven’t fleshed that out enough”.

In many ways, the [Sinn Féin] Border poll proposal was a mirror image of the Brexit proposal

But many unionists are at least suspicious of North-South co-operation?

“They were suspicious ... they got over it.”

Won’t he have to persuade unionists that engaging on the array of North-South issues he cites is worth doing in itself and not a slipway towards a united Ireland?

But is it also a means to an end for him?

“Not necessarily. I’m not as obsessional about the end result, provided where we end up is that we genuinely share the island.”

Is he a persuader for Irish unity?

“Look, I’m more in the Seamus Mallon view that we learn to share this island. To me, the genius of the Good Friday Agreement is that we don’t always have to end up talking about the constitutional status of the island. We just have to get on with the agreement.”

Is he worried that anxiety of unionists about the union after Brexit would be exacerbated by push from Dublin for a Border poll?

“I think Brexit has created anxiety on all fronts, both within the nationalist community and within the unionist community. My opposition at the time when Sinn Féin immediately proposed a Border poll was that they were adding a further level of divisiveness to an already difficult situation, and that they hadn’t thought it through,” he says.

Martin has been a fierce critic of Sinn Féin on many subjects. The difference between his Government’s approach and Sinn Féin’s approach is becoming one of the chief dividing lines of Irish politics.

“In many ways, the [Sinn Féin] Border poll proposal was a mirror image of the Brexit proposal insofar as [it was] just ‘Let’s have a poll, irrespective of the consequences’. It would have become very divisive, very quickly,” he says.

“I get the sense that they [Sinn Féin] have resiled a bit from that, from the immediacy of a Border poll. Not in the elections, and they keep repeating it to their base. But I think it would have the opposite effect of what they’re trying to achieve. It would get people’s backs up. It creates divisiveness, which in my view it would be the antithesis of what we’re trying to do.

“We’re trying to unite people here, in a common purpose. I don’t think it should be a majoritarian, territorial approach. That will not suffice.”

But isn’t Sinn Féin right that there is no clear path to a referendum – which after all is provided for by the Belfast Agreement – and that one should be identified and, if necessary, prepared for?

That is not, however, how Sinn Féin – or the IRA – sold the agreement, and the broader peace strategy, to their members. They told them it was the path to realising their objectives, including a united Ireland, by peaceful means.

“If I have to sum up the Sinn Féin approach, it’s more electoral than governmental. It’s always about the next election, it’s always about the base ... They haven’t worked the agreement, and I think there’s an opportunity now, and I hope they do it,” he says.

Martin refuses to be drawn on timescales for a possible referendum on unity. “I’m not going to be prescriptive about timescales.” Meanwhile, he says, “there’s a hell of a lot we can be getting on with.”

And while he says that the provisions for a simple, 50 per cent plus one requirement in the Belfast Agreement for a majority in favour of unity should stay, he cites Mallon – who argued it should be changed to a system of parallel consent on both communities – approvingly in another respect.

“The spirit behind what Seamus Mallon was arguing is the key point. And he’s right. He said his neighbours have been here for 400 years. It’s about time we learned to live together.”

But he chooses not to?

“I choose not to. Because I just don’t have any conviction in the rhetoric. The hard yards are more difficult, but they’re more effective.”