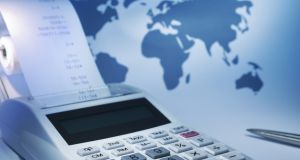 The International Monetary Fund estimates that €550bn in profits, more than a third of profits generated by foreign subsidiaries of multinationals, are transferred to tax havens annually

The Covid-19 pandemic appears to have strengthened French resolve to achieve fiscal harmonisation in Europe, with possible far-reaching consequences for the Irish economy.

A policy paper issued this month by Notre Europe Jacques Delors Institute quotes the conclusion, adopted by the European Council on July 21st, 2020 , regarding solidarity.

“While utmost vigilance is still required on the sanitary situation, the emphasis is now shifting to mitigating the socio-economic damage. This requires an unprecedented effort and an innovative approach, fostering convergence, resilience and transformation in the European Union,” the council said.

Ireland, the policy paper notes, “has benefited from substantial structural funds, which have offset revenue losses resulting from its tax attractiveness policy in corporate tax”.

The author begins the paper by attempting to define a graduated scale of tax behaviour, starting with tax optimisation, which is legal, rising to tax avoidance which, according to the Organisation for Economic Co-operation and Development, “could be strictly legal” but “is usually in contradiction with the intent of the law,” progressing to tax evasion and the worst offence, tax fraud, which is punishable by law.

Ireland appears on most of the lists of countries which the policy paper links to harmful tax competition. The Tax Justice Network’s list of tax havens ranks Ireland sixth out of 10 in terms of importance of tax havens.

The US Bureau of Economic Analysis says nearly 60 per cent of profits made by US multinationals outside the US are declared in low-tax countries, particularly Ireland and Bermuda.

The institute’s 21-page policy paper interprets the European Council statement to include the fight against harmful tax competition.

The paper comes at a time when the European Commission is stepping up its campaign against sweetheart corporate tax deals in the EU as pressure builds for companies and wealthy individuals to bear more of the fiscal burden imposed by the deep recessions sweeping Europe.

Paolo Gentiloni, the EU’s economics commissioner, said that Brussels wanted to pressure capitals to root out “structures that facilitate aggressive tax planning” as part of their national reform plans under its €750 billion recovery fund.

The commission has previously identified the Republic among member states whose tax rules are used by companies engaging in aggressive tax planning.

“The extraordinary spending involved to drive the recovery effort and the risk of economic divergence within the union require this ‘unprecedented effort’ in terms of European solidarity, which includes the fight against harmful tax competition,” the paper concludes. “In the new post-Covid-19 world there is no place for harmful tax competition.”

The European Parliament should suggest “conditionality” which would “focus on rolling back the most harmful tax regimes and practices in order to benefit from the structural funds or rebates from budget financing contributions,” the French official writes.

The International Monetary Fund (IMF) estimates that €550 billion in profits, more than a third of profits generated by foreign subsidiaries of multinationals, are transferred to tax havens annually. Nearly half of that sum reportedly goes to Luxembourg, Ireland, the Netherlands, Belgium, Cyprus and Malta.

Attempts by the EU to prevent harmful tax competition among EU states have often failed because the unanimity rule grants a veto power to each member state. Nordic and East European countries and Ireland and Portugal have opposed a shift to majority voting on fiscal matters.

Yet France has not given up. The European Affairs commission of the National Assembly reports that Clément Beaune, a close Macron adviser who recently became secretary of state for European Affairs, told a hearing on September 17th that “blockages linked to the unanimous vote could be overcome in the areas of taxation and foreign policy through recourse to the passerelle clauses foreseen by the treaties” .

A passerelle clause can change the voting rule in the council from unanimity to majority voting, the institute report notes. It suggests that article 116 or article 192 of the Treaty on the Functioning of the European Union might be invoked.

1 PTSB plays down Ulster Bank talk as it sells €1.4bn of loans
2 Up or down – how much is your Local Property Tax this year?
3 Housing crisis will be permanent unless there is radical rethink, industry warns
4 How much state pension will I get next year?
5 Irish tech company Asavie acquired by Nasdaq-listed Akamai
6 Am I crazy to consider switching to an Ulster Bank mortgage?
7 How long can Government afford to keep State pension age at 66?
8 Customers say how companies act during Covid-19 reflects their trustworthiness
9 Brexit to curb services trade with UK, accountants group warns
10 Ghost newspapers and zombie brands are stalking the media
Real news has value SUBSCRIBE