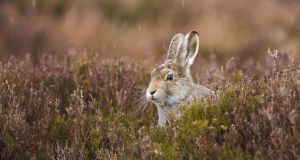 Last year then minister for heritage Josepha Madigan suspended the licences pending further study into the prevalence of the disease among the hare and rabbit populations. Photograph: iStock

Licences to allow coursing clubs capture live hares for the winter season have been granted by the Minister for Housing, Local Government and Heritage Darragh O’Brien.

Mr O’Brien confirmed in a parliamentary question reply that licences had been issued under the Wildlife Acts.

Mr O’Brien said his department issued the licences on September 16th “to the Irish Coursing Club (ICC) on behalf of its affiliated clubs to net and tag hares for the forthcoming 2020/2021 coursing season”.

Social Democrats TD Jennifer Whitmore if a decision had been made in line with “departmental advice” in the wake of controversy over the spread of a deadly virus in the hare and rabbit populations in Ireland.

Ms Whitmore said she was “very disappointed” at the decision. “I had asked that he suspend the issue this season in light of recent incidences of the rabbit and hare disease RHD2 (rabbit haemorrhagic disease).

The Wicklow TD said “we don’t fully understand the prevalence of this disease across the country nor the potential impact on our hare populations.

“Until we have that important information, I believe that the Government should take a precautionary approach and suspend licences. Our endemic hare population is too important not to base Government decisions on science and evidence.”

Last year then minister for heritage Josepha Madigan suspended the licences pending further study into the prevalence of the disease among the hare and rabbit populations. The indigenous Irish mountain hare is a protected species under the Wildlife Act.

However, after intensive lobbying from coursing clubs, and from 16 rural TDs, Ms Madigan issued a restricted licence that ran from November.

It imposed 35 conditions and similar restrictions apply this time around.

In a statement the department stressed that “this is an annual licence and is not a new departure” that said it is “circumscribed and restrictive in nature, especially in light of the continued existence of the RHD2 virus in the countryside”.

“No coursing activities or netting of hares can take place within 25km of where a dead rabbit or hare which tests positive for RHD2 is found.

“Coursing events will be monitored by staff of the National Parks and Wildlife Service and the licenses issued will be immediately re-evaluated if there is evidence of any issues arising during the course of the season in relation to compliance with the conditions on the license.”

The department also said it had “underlined to the ICC that their clubs need to adhere to all Government guidelines in respect of Covid-19 and that the necessary protocols are in place to ensure full compliance with these guidelines.”

The Minister would re-evaluate the licences if there was any issue giving cause for concern about “strict adherence to all of the conditions”.

The responsibility for issuing the licence has moved to heritage and Mr O’Brien from Green Party Minister Minister for Media, Tourism, Arts, Culture, Sport and the Gaeltacht Catherine Martin, and party colleague and Minister of State in her department Malcolm Noonan.

The party which supports a ban on coursing was unsuccessful in getting the issue included in the programme for government.