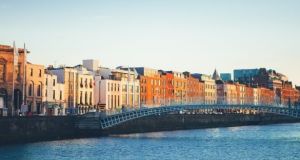 The report says that until the early onset of the coronavirus pandemic, the Irish economy remained broadly competitive but with some areas in which improvements were needed

Irish businesses are facing into a period of “extreme stress” due to the continued fallout from the coronavirus crisis and Brexit, the National Competitiveness Council (NCC) has warned.

In a new report, it identifies four broad challenges that need to be addressed to help support economic recovery and ensure continued competitiveness.

These include reskilling workers from sectors unlikely to recover from the coronavirus crisis so as to stop unemployment becoming entrenched. It also calls for concrete actions to address climate change and for increased investment in physical infrastructure, such as housing.

“Irish businesses cannot continue to be hamstrung by well-known challenges in the domestic economy that remain to be addressed,” the report says.

“It is becoming increasingly clear that ignoring long-standing burdens on competitiveness cannot continue, and there is now a small window for Ireland to seize the opportunity to take the steps necessary to addressing these long-standing issues that have hampered Irish businesses, and especially SMEs, for too long,” it adds.

In its latest study, which has been published earlier than usual so its findings can feed into Budget 2021, the NCC also calls for reform to resolve long-standing issues that are hurting businesses. These include high interest rates, legal fees and insurance costs. It also highlights ongoing problems in the areas of housing and childcare and recommends actions that should be taken to address them.

The report says that until the early onset of the coronavirus pandemic, the Irish economy remained broadly competitive but with some areas in which improvements were needed to bridge the gap with other nations.

“Covid-19 has brought about an exceptional level of global uncertainty, which is compounded in the Irish case by the approaching deadline for negotiating the future trading relationship between the UK and the EU, as well as heightened international trade tensions,” said NCC chairwoman Dr Frances Ruane.

“As a small, highly open and concentrated economy, Ireland is heavily exposed to external shocks, making it vital that the economy retains its competitive position. At the heart of Ireland’s national competitiveness is creating an environment in which Irish businesses are able to compete successfully in international markets,” she added.