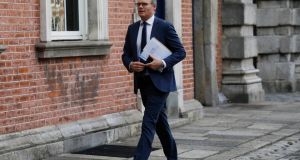 Tánaiste and Minister for Foreign Affairs Simon Coveney said Ireland could face many millions of euros in EU fines for introducing such a law. Photograph: Leon Farrell/Photocall Ireland/PA Wire

The Government’s opposition to the Occupied Territories Bill is based on legal advice from the Attorney General which does not take important case law into account, according to a Palestinian rights group.

The Bill, which would ban imports from illegal Israeli settlements in Palestinian territories, has been opposed by Fine Gael on the basis that it would contravene EU law. The issue has become a sticking point in government formation talks in recent weeks.

It is understood the Government is also worried how the Bill could impact on Ireland’s chances of winning a seat on the United Nations Security Council ahead of the vote next Wednesday.

Tánaiste and Minister for Foreign Affairs Simon Coveney has said the Government received legal advice from the Attorney General that EU trade agreements prevent Ireland acting unilaterally on the issue. He also said Ireland could face many millions of euros in EU fines for introducing such a law.

That legal advice has now been leaked, leading to Sadaka, an Irish Palestinian rights organisation, to criticise it as “exposing the weakness of the basis for Fine Gael’s continued opposition to the Bill”.

Supporters of the Bill argue Ireland can unilaterally ban imports from the occupied territories under a provision which allows it to take decisions based on “public policy”.

In his opinion Attorney General Séamus Woulfe said there is an “absence” of case law before the European Court of Justice (ECJ) to support a “public policy” exemption.

Sadaka’s legal officer Gerry Liston criticised this view. He said the opinion does not take account of supporting decisions of the court which have been cited by Prof Takis Tridimas of King’s College in London.

Prof Tridimas, a barrister and EU law expert, wrote a legal opinion for the Bill’s sponsor, Senator Frances Black, citing previous decisions upholding the right of a member state to unilaterally ban imports from a country.

In one case the ECJ held that trade restrictions imposed on Russia for breaches of international law in Ukraine were allowed on “public policy grounds”. This decision, the Rosneft decision, is absent from the Attorney General’s advice.

“This shows that it’s not a legal issue, it’s a question of political will. The weight of legal advice makes it clear that we can pursue this if we’re willing to be brave about it – we need to stand up and show leadership,” Ms Black said.

Mr Liston said Fine Gael’s objections to the Bill appear to go beyond the parameters of Mr Woulfe’s advice. He said there is no mention in the advice of the fines and compensation claims Fine Gael said would result from the Bill’s passage.

Senior counsel Michael Lynn has submitted to the Oireachtas Committee on Foreign Affairs that if the law is found to contravene EU agreements, Ireland would first be given an opportunity to amend or repeal the legislation before any fines would be imposed.

“Fine Gael must stop misleading the Oireachtas and the public on this,” Mr Liston said on Friday.