Methane, cattle and 7% - The crunch climate issues in the government formation talks

How exactly will Ireland achieve a 7% emissions cut, and what is agriculture’s role? 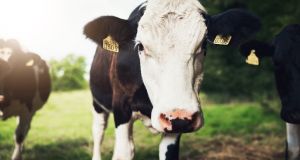 Scientists, climate campaigners and most Greens insist in that context livestock numbers must be reduced after years of sustained expansion. Photograph: Getty Images

Among the most problematic issues in talks on forming a new government were inevitably going to be around climate action; measures to decarbonise the economy – and how exactly do you achieve an agreed cut in carbon emissions?

The headline figure of a 7 per cent cut a year in emissions was provisionally agreed in advance in an exchange of documents by Fine Gael, Fianna Fáil and the Greens.

A big problem that emerged since is the detail; how exactly is that achieved? What is realistic given the country’s poor performance to date? And how is the workload to be shared by sectors; notably agriculture.

With farming the most contentious issue is greenhouse gases in the form of biogenic methane from cattle and nitrous oxide from fertilisers.

Why is biogenic methane one of the big hurdles?

The term may have urban TDs, senators and members in the big parties scratching their heads, but biogenic methane is the single biggest source of emissions in agriculture, which accounts for a third of Ireland’s emissions.

Derived from CO2 produced from biological (plant and animal) sources it is emitted mostly by cattle belching. One tonne of methane in 2018 will have long since left the atmosphere by 2118, but it will have been responsible for 34 times more heat trapping than a tonne of CO2 emitted at the same time.

There has been intense debate in scientific and agriculture circles, however, about how methane is counted – and significant consensus has emerged on the case for a more robust system to monitor its impact separate to CO2.

Farming interests and some scientists say measuring its impact in agriculture has led to overestimation of its carbon footprint.

New Zealand, not unlike Ireland from an agriculture perspective, has successfully adopted such a new approach in methane accounting.

Where do cattle numbers come in?

Other scientists, climate campaigners and most Greens insist in that context livestock numbers must be reduced after years of sustained expansion.

There is, however, a middle ground which accepts a drastic cull of the national herd is not required; a gradual reduction is acceptable provided other measures in a Teagasc roadmap deliver – including better breeding, and changes to fertilizer use and grassland management.

A separate reduction target for methane could be a good idea, climate campaigners accept. But it would need to be legally binding and deliver steady reductions in methane and nitrous oxide emissions from the agricultural sector if Ireland is to achieve necessary decarbonisation on a scale it has committed to.

Seeking special exemptions for agriculture on the basis that soils, hedgerows and marine kelp forests can absorb emissions from livestock, are of limited benefit in carbon counting terms, so are unlikely to be accepted by the Greens.

How might the methane and cattle numbers issue be resolved?

Nuancing all this in a deal is immensely challenging. Green negotiators are demanding specifics. How the cattle numbers issue is addressed, or couched, will be critical to big farmers within Fine Gael and Fianna Fáil stomaching redirection of agriculture. The smaller party, meanwhile, wants sufficient evidence it entails moving away from intensive farming.

Fundamental reform of the EU Common Agriculture Policy with a view to rewarding farming that is less carbon intensive and embracing sustainability is concentrating minds on all sides.

There is some flexibility. Stop Climate Chaos noted recently that nobody is expecting farming to cut emissions as fast as other sectors. Agricultural emissions, they suggested, need to fall from 20 million tonnes a year to about 12 to 15 million tonnes – an additional saving of four to six million tonnes compared with current plans.

The rest of the economy and society will have to cut emissions from 40 million tonnes to 15-18 million tonnes, “so this is a very good deal for agriculture”, it pointed out.

Critically, if agriculture doesn’t deliver at that scale, other sectors will have to deliver to a greater extent – at greater financial cost.

Why is that 7 per cent emissions cut a holy grail issue for the Greens?

The Greens didn’t come up with the 7 per cent figure. The UN Environment Programme did. In December it said if we want to limit global warming to 1.5 degrees – the Paris Agreement goal which Ireland has signed up to – global average emissions reductions need to be 7.6 per cent a year for the next decade.

Leading climate scientists have concluded failure to achieve that target by 2030 will cause irreversible impacts on the planet. In that context, it is understandable that it is a core demand of the smaller party.

Much hinges on whether it’s an average 7 per cent cut a year up to 2030, or a fixed annual cut of 7 per cent. There are indications that hardline greens, including younger members born out of the youth climate movement, seek the latter.

The second figure is harder to achieve as big action on public transport; rolling out of renewable energy infrastructure, retrofitting homes, moving away from fossil fuels and changes to agriculture take time to generate significant carbon reductions – and are most likely to be achieved in the second half of the decade.

There is outstanding maths issue, what does that entail?

Confirming emissions reductions is a complex and somewhat inexact science. The EPA audits emissions across the economy. So a guaranteed 7 per cent cut a year is not easily nailed down and subsequently verified.

It explains why Minister for Climate Action Richard Bruton suggested it was likely Ireland would end up like Denmark – a global leader on climate action – “which has committed to high ambition but cannot specify all of the pathway”.

And they cannot bank on a Covid-19 climate “bonus”. The pandemic is predicted to see a 5 per cent cut in 2020 emissions at best, according to climate scientists. It will be a temporary respite, given the scale of decarbonisation the country needs to embrace. And we know emissions are already rising again as economies ease lockdown.