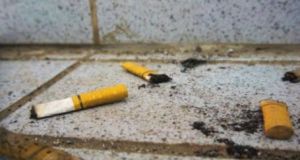 Smokers were the biggest litter louts in 2016, according to Minister for the Environment Denis Naughten.

Big increases in fines for litter offences are on the way because of concern that current penalties do not provide a “sufficient deterrent”.

Smokers were the biggest litter louts in 2016, according to Minister for Environment Denis Naughten, who said “the main cause of litter pollution in Ireland in 2016 was cigarette litter”, while bottles accounted for 1.6 per cent of total litter.

Mr Naughten said pollution monitoring surveys had shown improvements year-on-year, but he was “still concerned that the fines for offences in place under the Litter Pollution Acts do not serve as a sufficient deterrent”.

The Minister said “it is my intention in the near future to seek Government approval for substantial increases in the statutory fines for litter offences”.

He was speaking during a Dáil debate on plastics and pollution. Mr Naughten told TDs he was determined to make sure the “most difficult non-recyclable plastics”, including soft wrapping, cling film and single-use items such as coffee cups and plastic cutlery “will be recycled or biodegradable and that they will not go into landfill sites”.

The Minister acknowledged the Sick of Plastic campaign on April 21st, which is encouraging consumers to “shop and drop” – to shop as normal in supermarkets, and to drop unwanted packaging at the checkout after they pay.

Fianna Fáil environment spokesman Timmy Dooley said “we all know from paying household bin charges how expensive it is to dispose of waste”. He added that an estimated 60 tonnes of waste are dumped illegally in Ireland every day.

Sinn Féin environment spokesman Brian Stanley said 983,380 tonnes of packaging waste were generated in 2015 in Ireland, when the State was still in recession. The levels would increase against this year.

He claimed “manufacturers are creating a conveyor-belt system of waste with little interest to date from governments in terms of changing that”, while plastic use in packaging currently accounted for 40 per cent of the EU’s overall level of plastics.

Labour spokesman Sean Sherlock said that two years after the Government had pledged to introduce legislation to ban microplastics or microbeads, this was still awaited.

Mr Sherlock said he had introduced legislation on the issue which followed a Bill introduced by Green Party Senator Grace O’Sullivan to prevent those plastics being ingested by fish and eventually working their way back into the human food chain.

Ireland on alert as suspected case of coronavirus treated in Belfast 02:19
Council ‘held to ransom’ by Government over €182m payment 02:00
Call for improved rent collection as 61% of Dublin council tenants in arrears 02:00
‘Serious’ child abuse allegations repeatedly not investigated 01:00
Facebook ‘looking into’ link between Irish website and firm that breached privacy laws 00:01
SUBSCRIBER ONLY