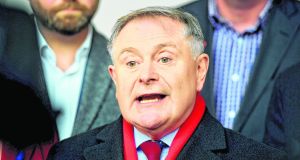 Labour leader Brendan Howlin: asked if the Government had decided whether or not the State should have a ‘bespoke security agency’

Ireland may be too small a country to establish a CIA, KGB, or Israeli Mossad-style security agency, the Taoiseach has told the Dáil.

“The Government would “need to weigh up the pros and cons” of establishing such an agency, he said.

“I am cautious about it, to put it that way,” Mr Varadkar said. “We are a small, neutral country.”

The Commission on the Future of Policing is considering the issue and a report is expected in September.

Mr Varadkar was responding to Labour leader Brendan Howlin who had asked if the Government had decided whether or not the State should have a “bespoke security agency” incorporating military intelligence, cybersecurity, the Defence Forces and An Garda Síochána.

Mr Howlin said Ireland is “almost unique” in not having such an agency. “Is it time for it?”

Mr Varadkar replised that just because other countries have it, it does not necessarily follow that Ireland should too.

Such a bespoke agency “I imagine would be an Irish version of MI5, Mi6, Massed or the CIA, or something along those lines”, the Taoiseach said.

On the face of it, it sounded like a good idea but looking at it more closely “there are definitely upsides and downsides”, he added.

There would be a “quite difficult transitional period” and they would have to legislate and transfer staff from An Garda, military intelligence and other places. He also said there would be considerable costs involved.

The Labour leader, referring to the Salisbury chemical attack, said the Government had announced it was “undertaking a full security assessment of the risks Ireland faces from Russian activity in Ireland”.

But the Taoiseach said “a security assessment was carried out on what (Russian) diplomat would be expelled.

“That was the extent of it,” he said. “We are not to my knowledge carrying out a wider security assessment of Russian activities in the State or with regard to the embassy. I understand the extension to the embassy will largely be used for accommodation for offices and also sleeping quarters for staff.”

Sinn Féin leader Mary Lou McDonald said the Taoiseach expelled a Russian diplomat based on British military intelligence. But over the next two weeks Israeli soldiers killed 31 Palestinians and injured over 1,000 others in Gaza.

“Not one Israeli diplomat was challenged, much less expelled. Why the double standards?” she asked.

Mr Varadkar said the Government regularly challenges the Israeli government and its diplomats “about the occupation of Palestinian territories”.

But he said the Salisbury attack was “on EU soil and the violation of sovereignty of an EU state”.

Fianna Fáil leader Micheál Martin said there appeared to be sustained cyberattacks directed specifically against countries that have recently imposed sanctions against Russia on critical infrastructure, including the British power grid and air traffic control systems.

The Taoiseach replied that the National Cyber Security Centre was doing a good job in monitoring the situation and preventing attacks but was having difficulty recruiting the necessary specialists.

He added that the “WannaCry” cyberattack did a lot of damage to the NHS but not to the HSE, because its IT systems were better prepared. “That is not often the case but it was the case on this occasion.”