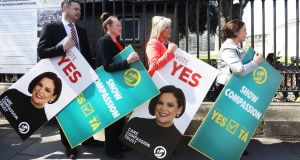 Sinn Féin will seek to harmonise abortion laws across the country if the Eighth Amendment is removed from the Constitution.

Abortion is banned in almost all circumstances in Northern Ireland, while in the Republic it is permitted only when a mother’s life is at risk.

The Government has said it will introduce laws to allow access to terminations within the first 12 weeks of pregnancy, when a mother’s life or health is at risk up to 24 weeks and in the cases of fatal foetal abnormalities.

Sinn Féin leader Mary Lou McDonald said the party believes legislation in Northern Ireland should be “in kilter” with laws in the Republic.

However she added “not all of that is entirely in our control”, noting opposition within the unionist community.

Sinn Féin members are bound by any party decision on abortion. But there is significant resistance to changing its stance, particularly from members in Northern Ireland.

Party leader in Northern Ireland Michelle O’Neill said her focus would be on changing legislation to allow for terminations in the cases of fatal foetal abnormality.

Pushing for legislative change in this area will be a priority in any future executive, added Ms O ’Neill.

“We discuss many, many things with the other political parties. But in this instance, particularly in relation to fatal foetal abnormality, the women in the North are being failed and we need legislation. And we need it now.”

The party on Thursday launched its campaign to repeal the Eighth Amendment of the Constitution. The Sinn Féin leader said May 25th is a “date with destiny”. It was a once in a lifetime opportunity to “right a historical and Constitutional wrong”, said Ms McDonald.

Party posters prominently feature the Sinn Féin leader’s photograph, but she denied this was an attempt to personalise the campaign. Ms McDonald said it was “important as a political leader to stake out my positions on the issue. As with any other major constitution or political issue, as a leader you lead and you lead from the front.”

Fine Gael members in favour of repeal will launch their campaign this weekend, while a number of Fianna Fáil TDs and Senators gathered on Thursday to call for a Yes vote in the upcoming referendum.

Meanwhile, the Together For Yes campaign has insisted its fundraising efforts are fully compliant with legislation.

The Save the 8th group had said it believed the majority of donations given through the recent fundraising launch are in breach of the law.

Director of Together For Yes Orla O’Connor said she was 100 per cent confident the group has acted within the legislation and has enforced a series of checks and balances on each donation.

Ms O’Connor also encouraged younger voters to check the register and said 122,000 young people who turned 18 since the last general election are eligible to vote.

Any person who turns 18 before the referendum on May 25th is also eligible to register in advance of the deadline.

4:22 Coveney’s London talks on NI riots expected to go ahead this week

Coveney’s London talks on NI riots expected to go ahead this week 19:14
Rush for flights into State from countries set for quarantine list 19:06
Covid-19: Minister seeks ‘solidarity tax’ on high earners and firms ‘highly profitable’ in pandemic 18:32
Philomena Lee among five given leave to challenge mother and baby homes report 18:18
Coronavirus: 394 new cases and no further deaths reported in the State 17:52