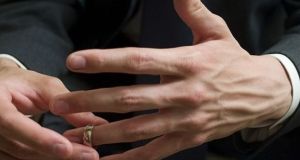 The change in mandatory divorce wait time will require a constitutional referendum.

The Government has accepted Fine Gael TD Josepha Madigan’s proposal to reduce the waiting time for a divorce from four years to two.

The change will require a constitutional referendum.

Ms Madigan told the Dáil the current constitutional requirement for separating couples to live apart for four years out of the preceding five before initiating divorce proceedings was cumbersome and restrictive.

Her Private Member’s Thirty-fifth Amendment of the Constitution (Divorce) Bill 2016 provided for the period of time to be two years out of the previous three, she said.

“I believe this to be both fair and achievable, and it will make a significant positive difference to the lives of separating couples in Ireland, ’’ Ms Madigan added.

Ms Madigan said Ireland had changed a lot in the past 20 years.

“We have become a more open, welcoming society, less willing to judge the personal lives of others,’’ she said.

“I do not believe the attitudes towards divorce, expressed in the 1995 referendum, are a reflection of today’s Ireland.’’

Ms Madigan said Ireland had not seen a wholesale breakdown of marriage and, at one-in-10, it had one of the lowest rates in the world.

“The Irish people, in the main, still rightly cherish the ideal of marriage,’’ she added.

Ms Madigan said the enactment of the Bill would not promote marital breakdown.

“It will simply allow people whose marriage has broken down to access the legislative certainty and finality of a divorce within a reasonable time,’’ she added.

Ms Madigan suggested the constitutional referendum required could be held on the same day as other issues were put to the public.

She said the trend across Europe and beyond was towards shortened mandatory waiting periods for divorce, which was widely seen as inherently fairer for separating couples.

Minister of State for Justice David Stanton said the four-year period was intended to ensure spouses would not enter into divorce lightly and would have the necessary time to reflect on the serious steps they were taking.

Twenty years later, the Government believed it was appropriate to re-examine the constitutional provisions and welcomed Ms Madigan’s Bill, he added.

The Bill now goes to the Oireachtas justice committee.