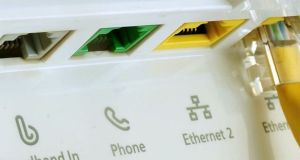 The national broadband plan should be scrapped and more affordable alternatives should be considered to provide high-speed internet access to rural areas, the Oireachtas Committee on Communications has been told.

In a joint submission the head of the department of economics in University of Limerick Eoin Reeves and lecturer Dónal Palcic said there were “legitimate concerns about the justification for the project”, which could cost as much as €5 billion.

They also noted concerns about “the potential cost of the project, and knock-on effects for other investment priorities”.

When addressing the committee Mr Reeves said it was their “considered view that the current procurement should be terminated and more affordable alternatives explored”.

“The governance problems that have been witnessed in the case of this procurement process have been widely discussed. In economic terms, the fundamental weakness has been the decision to continue the process with one remaining bidder.

“Other issues have arisen in relation to the changes in composition of the bidder’s consortium, the drip feed of information about key aspects of the procurement, including the precise level of equity being invested by the preferred bidder, and controversy around interactions between the [former minister Denis Naughten] and investors in the consortium behind the remaining bid.

“Overall, the governance problems that have arisen are such that the procurement lacks the required level of legitimacy and public confidence.”

Mr Reeves said he has concluded that the procurement approach “has not satisfied the criteria necessary to ensure that value for money will be achieved”.

“The importance of competition for contracts cannot be over-emphasised. Competition increases the incentives for bidders to develop proposals of higher quality and for reducing costs and delays.”

Granahan McCourt, the private company leading the consortium due to take on the broadband contract, which may cost up to €5 billion, said in May that it plans to invest an initial €220 million in the project.

The aim of the project is to deliver high-speed broadband to 540,000 households, farms and other businesses who are currently not on such a network.

Internal advice on the plan from Robert Watt, secretary general of the Department of Public Expenditure, revealed officials had “strongly recommend against approval of the appointment of the preferred bidder” due to concerns over the high cost of the plan.

Mr Reeves also told the committee that he was concerned that the National Development Finance Agency (NDFA), which advises on high-cost public projects, did not have more of a role in the broadband process. “Where is the NDFA? I think it is a question that needs to be asked.”

Mr Reeves also said he believed the State would be “better protected” with a State-owned model of broadband infrastructure.