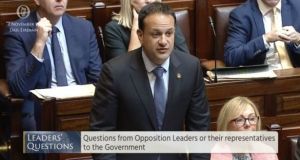 Taoiseach Leo Varadkar insisted the dispute by 10,000 workers could be resolved without a strike on Thursday by going to the Labour Court. Photograph: PA Wire

There were tetchy exchanges in the Dáil as Taoiseach Leo Varadkar was accused by Fianna Fáil leader Micheál Martin of being “dismissive” of the situation of low-paid workers ahead of the strike on Thursday by HSE support workers.

Mr Varadkar in turn accused Mr Martin of hypocrisy and said it was Fianna Fáil who cut the minimum wage while Fine Gael had increased it four times.

Mr Martin claimed the Government was attempting to “kick the can down the road” to 2021 but the Taoiseach said the issue could be resolved through the Labour Court.

The Taoiseach insisted that the dispute by 10,000 workers including care assistants, porters, surgical instrument cleaners, catering and other staff could be resolved without a strike on Thursday by going to the Labour Court.

Mr Martin said the Taoiseach appeared to have no problems with the “massive overspends” on the National Children’s Hospital and broadband, and dismissed opposition concerns.

“But when it comes to low-paid workers in our health services and defence Forces you get on your high horse, adopt a dismissive tone and attack the Opposition,” he said.

When Mr Martin claimed the Government was attempting to pre-empt the outcome of a Labour Court decision by putting conditions on referral of the dispute to the court, Mr Varadkar claimed the Fianna Fáil leader was making an allegation against Labour Court.

The Court acted independently and suggesting it would ever be involved in “fixing an outcome is just wrong and you should withdraw it”, he said to Mr Martin.

The forthcoming strike by HSE support staff dominated Leaders’ Questions on Wednesday and Sinn Féin leader Mary Lou McDonald told the Taoiseach “this strike will go ahead because you’ve broken your word”.

She said that in the downturn low-paid workers had taken on additional tasks and responsibilities.

She said: “There’s no need for a labour Court intervention”. What was required was a political decision that “these workers hold our health system together and a recognition that they are not being paid what they are due”.

But the Taoiseach replied that it was curious that Ms McDonald’s solution to overspending by the HSE was to spend a little more.

Ms McDonald said: “We will always call you out - not on your spending but on your waste of public monies.”

The Taoiseach insisted the Government was very aware of the important role of support staff and he said that all staff involved in the dispute were receiving pay increases. “This dispute is about pay increases on top of the increase they are receiving as part of the restoring of pay.”

Mr Varadkar said the dispute was around the implementation of job evaluation processes.

Later, Labour leader Brendan Howlin said that at a cost of €16 million a year the payment would not “break the bank”.

But Minister for Finance and Public Expenditure Paschal Donohoe pointed out that health spending overruns had gone from 6 per cent in one month to 9 per cent the next month.

He stressed that the HSE support workers had to be seen in the context of multiple claims from the trade unions.

Minister for Health Simon Coveney told Independent TD Peter Fitzpatrick said that the HSE and unions will result in some elective procedures, predominantly “scopes”, being affected.