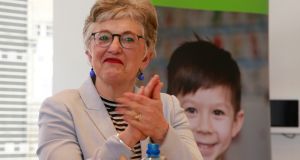 Minister for Children Katherine Zappone has put the controversial Adoption (Information and Tracing) Bill on hold. Photograph: Nick Bradshaw for The Irish Times

Legislation to give adopted people access to their birth records has been paused to allow more consultation with those affected and with political parties.

Minister for Children Katherine Zappone has put the controversial Adoption (Information and Tracing) Bill on hold. The committee state of the legislation, which was due to continue in the Seanad on Wednesday afternoon, did not go ahead.

The delay in the Bill follows a meeting on Tuesday night between the Minister’s department and advocacy groups, social workers and lawyers.

Ms Zappone said that after the meeting she believed it would be more helpful to discuss the challenges in the legislation before moving further with the Bill.

The Minister said she had written a long letter to Attorney General Séamus Woulfe to say she was “of the very strong view that we needed to adopt a different approach in preparing amendments to the Bill for committee stage”.

“The views expressed by adopted people about their life experiences and their interaction with State and church officials and agencies, particularly with regard to their efforts to seek information that is absolutely core to their identity, was deeply disturbing to me.”

Ms Zappone also said in her letter that “it was my considered view that the approach of the Bill, while not intended to, would extend the harm that adopted people through legal or illegal means have experienced in the past into the present”.

She acknowledged the stringent criticism of the Bill from adopted people and others about the approach the legislation took in dealing with the competing issues of privacy and identity.

The legislation has been dogged by controversy since its introduction in the Seanad two years ago. The Bill aims to establish a statutory scheme for information and tracing for adopted people with the creation of a searchable electronic database for the records that would become the responsibility of the Adoption Authority of Ireland.

One of its most trenchantly criticised provisions, since removed, required adopted persons to sign an undertaking that in order to receive their birth information, they would not contact their birth parents.

She said “on applications for the release of identifying information, important rights are engaged in relation to privacy and identity. But the legislation must provide a mechanism for balancing these rights in individual cases.”

Balancing these rights was a considerable challenge she said and delayed the Bill.

Ms Zappone said she wanted to meet the political groupings and independent politicians “to discuss and engage further on these difficult, sensitive and technical matters with regard to rights of natural parents and adoptive persons”.

She would also continue to consult interested parties and stakeholders.