Disservice done to Debenhams workers in wake of closure – Doherty

Pandemic payment would ‘absolutely’ be extended, decision due ‘in coming weeks’ 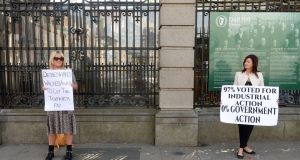 Minister for Employment Affairs Regina Doherty has told the Dáil that the State did Debenhams’ workers a disservice when they were prevented from protesting outside the department store after announcement of its liquidation.

She also said that it was very unlikely there would have been the really high level of public compliance with the health restrictions introduced to tackle this virus “without the relief that was provided for” by the pandemic payment.

Ms Doherty told Sinn Féin spokesman John Brady that the payment would “absolutely” be extended and a decision would be made “in the coming weeks” about how long it would last.

She added, however, that “the decision to support people’s incomes still stands and will stand for all of the phases until society is reopened again”.

The Minister was speaking during a debate on the impact of the coronavirus crisis on social welfare and protection.

Making reference to gardaí dispersing workers protesting outside the company’s stores after the announcement of its liquidation with the loss in Ireland of 2,000 jobs, the Minister said “this isn’t to be critical of anybody”.

But she added: “It really bothered me that men and women were standing outside shops in Cork and Galway, in Limerick and in Dublin and they weren’t allowed to quietly protest their disgust at how they’d been treated after years of service just to establish their right to be treated with respect and dignity.”

Debenhams’ workers protested outside the Dáil on Wednesday calling for the Minister to intervene with KMPG, the appointed liquidator, to extend consultations.

The workers also want Debenhams to honour a previous agreement to pay two weeks’ redundancy per year of service, in addition to statutory redundancy.

A number of parties raised the plight of the workers who and asked what could be done to prevent a similar situation arising again.

Ms Doherty said the liquidation happened very fast and there would probably be more in the coming months, particularly in the retail sector. But she said they would have to look at protecting the State as well as employees when it came to liquidations.

‘It is not within my gift’

The Minister also described as an “absolute shame” the treatment of a Dublin coffee shop owner whose landlord on Monday tore down a storage area for the premises.

Sinn Féin TD Chris Andrews said the landlord and a crew of men arrived at Nick’s coffee shop in Ranelagh and dismantled a storage area, throwing “all the products and stock out on to the footpath”.

He said “we cannot let ourselves become a society where this sort of behaviour becomes acceptable”.

Ms Doherty told him she did not know the ins and outs of the situation but said what happened was an absolute shame. “It is not within my gift” to introduce such legislation to provide similar protections to commercial tenants as to residential tenants but she would talk to the line Minister about the issue.