More than 1.26m workers relying on State for all or part of income 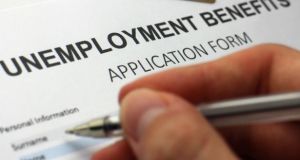 The number of people receiving the €350 special Covid-19 unemployment payment fell by about 5,000 over the last week. File photograph: Getty

The peak has been reached in the numbers receiving the special coronavirus unemployment payments and the level is expected to drop gradually over the coming weeks, the Minister for Social Protection Regina Doherty has said.

The number of people receiving the €350 special Covid-19 unemployment payment fell by about 5,000 over the last week to 585,000, according to figures released by the Government on Monday.

However, at the same time, the number of people who have had their pay supported under the separate Government temporary wage subsidy scheme increased by about 8,000.

The Department of Employment Affairs and Social Protection said there were now over 54,000 employers who had registered with the Revenue Commissioners for the Temporary Covid-19 Wage Subsidy Scheme (TWSS). It said more than 464,000 people had had at least one payment subsidised under the initiative.

In addition to the number of people receiving the special €350 per week special Covid-19 unemployment payment and those who are having their pay supported under the wage subsidy scheme, there are also 214,700 people who were on the Live Register as of the end of April.

This means there are more than 1.26 million workers relying on State support for all or part of their income.

Separately, there are about 44,600 people receiving the €350 Covid-19 enhanced illness benefit. This predominantly relates to people who have been advised by their GP to self-isolate as well as a smaller number of individuals who have been diagnosed with Covid-19.

The Department of Employment Affairs and Social Protection on Monday urged workers who were returning to employment this week on foot of the gradual lifting of restrictions to close their claim for the pandemic unemployment payment.

It said those resuming in employment on any day after Monday should close their claim for the pandemic unemployment payment on the actual day that they started back in work.

The department said that since the scheme was launched in mid-March more than 105,000 people had sought to close their pandemic unemployment payment. It said in many cases this was because employers were taking people back on to their payroll under the TWSS.

About 7,000 people were expected to receive the payment for the first time this week.

Ms Doherty said, in a statement, that the pandemic unemployment scheme had been had been built for speed and impact, and had “successfully allowed us to prevent a health and economic emergency from turning into a social crisis”.

She said it was very unlikely that the country would have seen the high level of compliance with the health restrictions introduced to tackle Covid-19 without the relief provided by the payments.

“Today, Ireland takes the very first tentative steps back towards normality - or the new normal whatever that may look like. While today’s figures confirm that we have reached the peak in terms of those receiving pandemic unemployment payments, I would expect over the coming weeks for those numbers to continue to gradually drop as more and more people return to work,” Ms Doherty said.

“Not everyone is going to be able to return to work so quickly and the pandemic unemployment payments will continue for now. Future decisions regarding the nature of the pandemic unemployment payment will be based on our commitment that everyone who genuinely needs help will get the most appropriate assistance and also based on the evidence we receive from the reopening of the economy.”

Meanwhile, the Government’s regular press briefing on Monday heard the Government does not expect to see an immediate decrease in the number of people claiming the €350 Covid-19 payment as restrictions on returning to work begin to gradually ease.

As more people close their unemployment payments in the coming weeks, it is expected the majority will still rely on State payments in the form of the wage support scheme.

At the briefing on Monday, it was also announced that State will be putting a new grant scheme worth €250 million to support small businesses reopen. The scheme is confined to businesses with less than 50 employees and with a turnover of less than €5 million per annum.

The Government has announced no end date for the emergency €350 payment but it is expected to be reviewed by a new government, if one is formed. That is expected to happen in mid-June.