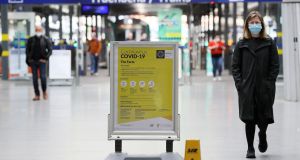 We have had sight of the Leaving Cert mathematics paper (higher level).

Here’s one of the questions:

If it takes the square root of Tony Holohan divided by 96 junior Ministers to fill the Dáil chamber, and 15 TDs spend an hour and 57 minutes in a 24-hour period breathing in it along with seven civil servants, two epidemiologists, five ushers, the head honcho of the HSE, a top trade union official and a Tom Parlon, and they remain at least two metres apart from one another at all times, and one of them develops a nasty cough within the following 48 hours, how long will it take to form a government and might it be better just to let the mandarins run the country and be done with it until this infernal pandemic has passed?

Because if the Covid-19 doesn’t get them in Leinster House, the latest set of Oireachtas-focused “guidance” will.

It didn’t have to be this way, but they only have themselves to blame. They asked for it.

What happened is that the former head of the HSE unburdened himself of some thoughts in Sunday’s Business Post, declaring the Covid-19 committee’s arrangements for the appearance of the country’s top pandemic firefighters at their first meeting was a potential health hazard for the witnesses and displayed “a cavalier attitude” to public health guidance rules.

“It runs the very real risk of knocking out our three top health officials just when they are most needed,” wrote Tony O’Brien.

So on Monday, the Oireachtas dashed off an email to one of our household name professors to ask what he made of these arrangements. He wrote back saying he didn’t think they were up to scratch on the protection front. So the timetable was very hastily dickied up, as Simon Harris would say, to make it possible for the three star witnesses to turn up for a very mild, almost pleasant, grilling.

Actually, we had temporarily forgotten about the professor in Galway, what with no day being complete anymore without an appearance on some platform or other from the Dublin-based professors O’Neill (Luke) and McConkey (Sam). There is a rumour in medical circles that Prof McConkey was accidentally cloned in Trinity College during frantic lab experiments to find a vaccine and four of him are now on the Covid media circuit.

But now Prof Martin Cormican has reasserted himself among Ireland’s Princes of the Petri Dish with his blockbuster communication to the Covid committee about the tightening-up of epidemiological standards in the Dáil chamber. Bar mainlining the sanitiser in their seats, there doesn’t seem much more they can do.

Prof Cormican says TDs should spend no more than two hours in the chamber and, should anyone test positive for the virus in a two-day window following a two-hour stint on the floor of the House, the TDs who were there with them for the same length of time must also self-isolate for two days. And they can’t put in their two hours and then go away for a disinfectant break and then return. Not allowed.

And social distancing will count for naught. The Ceann Comhairle and the Richard Boyd Barrett, for example, could be howling at each other like beasts across a prehistoric swamp and it wouldn’t matter. Put in the two hours under one roof and that’s them done for the day.

The Covid committee convened on Tuesday for its first full public meeting since it spent hours in private the previous week deciding the fairest way to make sure each of its members would get the exact same number of minutes’ speaking time in accordance with the size of their respective political parties – or something like that. It was also a nod to the health guidelines.

But it didn’t matter in the end. Because under the new guidelines they will only be able to meet for one measly, short session.

Sinn Féin’s Matt Carthy – in the second set of Tuesday’s three two-hour segments, all of which were attended by the TDs while the witnesses attended only one each – questioned if the strict rules of congregation required of the legislators were also to be applied in places of work, like meat factories.

“Today, we received guidance that I understand is from the HSE on the conduct of our meetings here. It states: ‘If a person develops Covid-19, any person who spent a cumulative period of two hours or more during a 24-hour period in an enclosed space’ – and this place apparently fits that definition – ‘should be advised to self-isolate within 14 days.’ In other words, if one person in this room gets Covid-19 then all of us should self-isolate.”

So if one worker in a meat factory, for example, got Covid-19, would the factory have to close down for two weeks?

Paul Reid, the chief executive of the HSE, passed the question to Dr Colm Henry, the chief clinical officer of the HSE, who pointed to what the guidance said and then rather vaguely addressed Carthy’s point.

“In the case of a meat factory or any other congregated setting, or any enclosed setting, the public health department will carry out an assessment and decide based on their assessment and the analysis of the risk what actions will follow, who is go into isolation, who is to be deemed a contact and who is to be tested.”

The Sinn Féin TD looked bemused. He tried again. In terms of the advice given to the politicians who toil in the Dáil, was that same advice conveyed to employers reopening for business this week?

It seems not. “There is no blanket advice given to every single setting.”

The work of some is more precious than others, it seems, or maybe it’s just that some (like TDs) are more precious than others. Can’t have them risking themselves by sharing the same air for more than two hours a day, but when they want to share a steak with a loved one at home, somebody has to put in the time to prepare it. And stand in a shop all day selling it.

Meanwhile, the frazzled Dáil business committee went into session again to decide how to cope with the latest guidelines on how to behave in Leinster House, which is apparently one big dangerous infection zone.

The Ceann Comhairle will only be allowed occupy his chair for two hours a day. Deputies will have to be recruited. The Lanigan’s Ball rule will have to be applied, with TDs stepping in for their allotted time and then stepping out for the rest of the day. They will probably need individual stopwatches to keep tabs on their daily limit.

It can’t work. The committee has put the advice out for general discussion among the parties and will consider it again next week.

What on earth will they do?