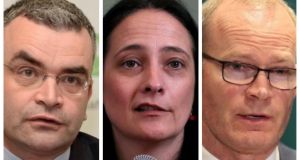 The deputy leaders of Fine Gael, Fianna Fáil and the Green Party held informal talks on Friday ahead of substantive negotiations next week on a possible coalition between the three parties.

It was the second time that Simon Coveney, Dara Calleary and Catherine Martin have met since the Green Party agreed to become involved in discussions on government formation with Fine Gael and Fianna Fáil.

They held preliminary talks in Leinster House on Thursday morning before the first full session involving teams from all three parties later that afternoon.

Well-placed sources said that Thursday’s meeting involving Mr Coveney, Mr Calleary and Ms Martin was about process and logistics, agreeing the nature and scope of the agenda.

“They are essentially marking out the pitch before the talks begin in earnest next week,” said one source.

Ms Martin was one of three Green Party TDs who voted against entering government-formation talks with Fine Gael and Fianna Fáil. However, she told The Irish Times last weekend she accepted the democratic outcome of the parliamentary party’s decision and would lead her five-person negotiating team in good faith.

The issue around achieving an average 7 per cent reduction in climate change emissions has become a central focus of negotiations.

Fianna Fáil has drafted its climate change spokesman Jack Chambers onto its team, and the former head of the all-party Oireachtas committee on climate change, Hildegarde Naughton, is on the Fine Gael team.

Minister for Climate Action Richard Bruton has also been drafted in to the negotiation team.

Taoiseach Leo Varadkar and Fianna Fáil leader Micheál Martin also wrote to the Social Democrats this week inviting the party to enter government formation talks. Both leaders committed to having “ring-fenced” funding for the health sector blueprint, Sláintecare, but would not commit to a Social Democrat’s act of campaigning to end the EU’s fiscal rules regime.

A spokeswoman for the Social Democrats said on Friday the party’s six TDs would be taking the weekend to consider its response to the letter. The Labour Party is also due to receive a letter from Mr Varadkar and Mr Martin.

However, the party said yesterday it would not be joining the three-party coalition, which would already have a majority.

1 Restaurants and gastropubs to reopen in December under Government plan
2 Helen McEntee holds up well for someone with barely a leg to stand on
3 In Brexit end game, Johnson scours menu of unpalatable choices
4 Q&A: What restrictions are going to be lifted next week?
5 Coronavirus: 335 new cases and three further deaths
Real news has value SUBSCRIBE