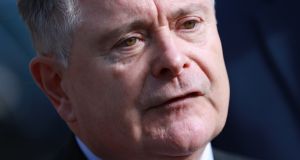 The Government has been accused of treating the Defence Forces differently over pay and conditions than other public sector workers because they cannot take industrial action.

Labour leader Brendan Howlin made the claim as the Cabinet considered the Public Sector Pay Commission report on proposed increases in allowances for military personnel.

Mr Howlin also accused the Government of attempting to hide behind the pay commission when there was a “clear flaw” in its remit, that it could not examine core pay of Defence Force members.

He was speaking in the Dáil in advance of the publication on Thursday afternoon of the report.

The Wexford TD asked why the Government did not look at core pay.

“Why is the Government refusing to examine the issue of core pay for the men and women of our Defence Forces?”

The reported 10 per cent increase in allowances would work out at an extra payment of between €4.20 and €12.30 per week.

“I don’t believe that the Government seriously thinks this will make an impact on requirements for our Defence Forces.”

He said that “every national pay agreement is held together by any number of sub agreement and special arrangements” and “there’s any amount of wriggle-room available”.

He told Minister for Employment Affairs Regina Doherty “you found it for nurses, rightly so. You found it for the Gardaí when you were put under pressure.

“But because you know the Defence Forces can’t strike they can be treated differently, not to have the increase in actual pay that everyone in this House and everyone in the trade union movement would agree they are entitled to.”

Mr Howlin highlighted the leaks of the report’s contents and said that “having road-tested its response in the media and found it to be seriously inadequate, apparently the Government has made another last minute adjustment by proposing another review, this time for just 2,500 members of the Defence Forces with specialist and technical skills”.

‘Leaving in their droves’

Ms Doherty asked if the Labour leader was suggesting the Government set aside the public sector stability agreements in place.

She acknowledged that much of the report’s contents had been leaked and said it was currently being considered by Cabinet.

The Minister said the Government was “challenged with addressing the issue around recruitment and retention” and the pay commission report would be published.

It would then be up to the Defence Forces and their representative bodies to decide if it was enough until they got to the next section of public sector pay agreement.

Sinn Féin’s public expenditure and reform spokesman David Cullinane called for the Defence Forces to be given collective bargaining rights, the same rights as other public sector workers.

He said many soldier saw their future in the Defence Forces as “unsustainable and unviable” and were leaving in their droves.

They are among the worst paid in the public sector.

He pointed to comments of a former senior member of the Defence Forces who described what was on offer as the equivalent of €1 a day after tax and “the kind of money you’d give to a child to get sweets”.

Ms Doherty reiterated that the report would be published this afternoon and it was for the Defence Forces to decide whether to accept its provisions.