The missing: Bill ends seven-year wait for declaration of death 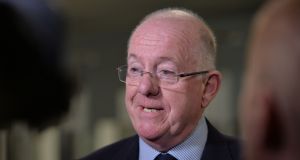 Minister for Justice Charlie Flanagan said he hoped the Bill would provide some closure for the families of missing persons. File photograph: Alan Betson

Families of missing persons presumed dead will no longer have to wait seven years to deal with their estates.

Legislation has been passed by the Oireachtas to facilitate families to apply to court for a presumption of death order and to allow a death certificate be issued.

Under existing laws, a person cannot be declared dead until they are missing at least seven years even in cases where a body has not been recovered after an accident. There is no provision for a death certificate to be authorised, which means that assets such as life insurance policies cannot be processed, nor can any decisions be made in relation to a missing person’s estate because their remains have not been found.

The Civil Law (Presumption of Death) Bill was originally introduced under another name five years ago as private members’ legislation by Fine Gael Senator Colm Burke. He then resubmitted it after the 2016 general election with the support of Independent Senators Lynn Ruane and Marie Louise O’Donnell.

Under the new law finally passed by the Seanad after amendment by the Dáil, provision is made for a presumption of death order where the circumstances under which a person went missing make death virtually certain or where the length of their disappearance shows it is highly likely death has occurred.

Mr Burke said he based the Bill on the recommendation in 2013 of the Law Reform Commission. He said similar legislation has been in place in Scotland for the past 40 years.

Welcoming the passage of the legislation in the Seanad, he said it would not involve a high cost for the State but would be a big change for families “and allow them to bring a finality to a tragedy”.

During debate on the legislation the Fine Gael Senator said there had been an incident in the past two years where death certificates could not be issued. He said “ four people died and bodies were recovered in two cases but not in the other two cases” and it caused other problems for families dealing with the tragedy.

Minister for Justice Charlie Flanagan said he hoped the Bill would provide some closure for the families of missing persons.

“The families of missing persons often feel like they are living in limbo. I hope that the Bill we have passed today will give them some measure of much needed closure by enabling them to put the affairs of their missing loved ones in order.”

Mr Flanagan added that the presumption of death order will have the same effect in law as the registration of a death under the 2004 Civil Registration Act.

“The Bill also provides that a presumption of death order has the effect of bringing a marriage or civil partnership with the missing person to an end,” he said.

“The Bill also provides that a presumption of death order has the effect of bringing a marriage or civil partnership with the missing person to an end.”

He added that he would work with the Minister for Employment Affairs and Social Protection to facilitate the establishment of the register of presumed deaths and the early commencement of the Bill.